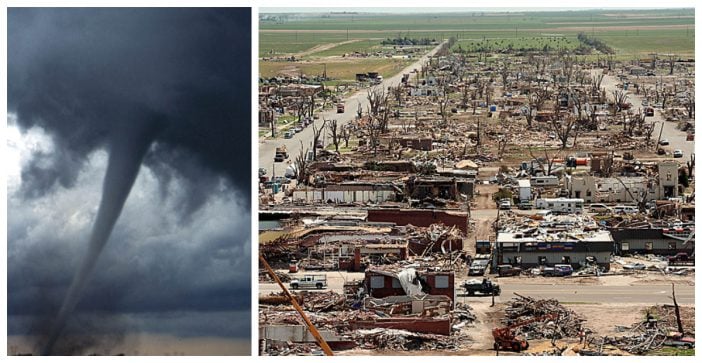 Tornadoes are part of the natural disasters that can occur around the United States, even in states where you’d assume you wouldn’t. If the weather conditions are right, you’ve got yourself a tornado.

There’s lots of ways to keep yourself safe from an impending twister. Some of these ways have been questioned overtime as to whether they’re actually a prime safety tip or if they’re just myths. Here are 5 myths you may have heard about tornado safety!

2. Ditches or other low spots are good places to hide

Many storms that produce tornadoes are also accompanied by massive amounts of rainfall and hail. This poses a serious danger for those who choose to hide in the safety of a ditch. There is some partial truth here; the lower you are, the safer you are from the tornado. But in this case, you might want to think twice.

3. You can’t outrun a tornado

While the National Climatic Data Center warns that you absolutely cannot outrun a tornado due to the strong winds, most cars can easily outrun a tornado. Tornadoes can move up to 70 mph, which most vehicles can surpass as long as theres no traffic blocking the way. In order to successfully outrun a tornado, you need to know how fast the tornado is moving and where it’s headed. It’s always advised to seek shelter immediately if you can’t outrun a tornado.

Many people believe that buildings often just explode from tornadoes because the air pressure is so low. The concept that opening windows will equalize the air pressure is a dangerous safety hazard. Open windows create an opening for debris to be blown into the building among other things. During all storms, the National Weather Service advises all to stay away from windows, so don’t open any!

5. The southwest corner of your basement is the safest place to hide

The idea behind this myth is that tornadoes usually move southwest to northeast, so the best place to hide is the southwest corner of your basement. However, there’s absolutely no evidence to prove that this is true. The best thing to do is hide in the center of the basement away from any walls and windows, cover your head, and stay low.

Be sure to SHARE this article if you were surprised by any of these tornado safety myths!