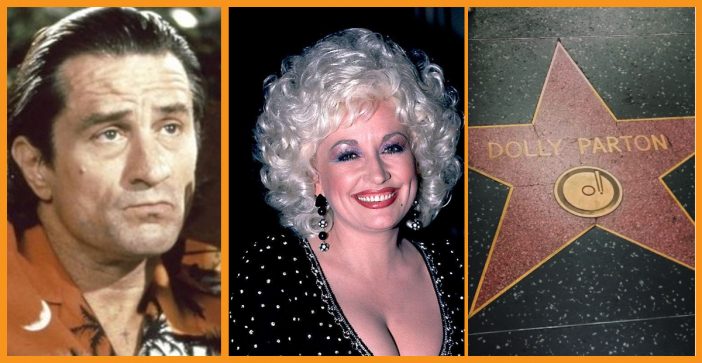 There are tons of stars in Hollywood who have been announced that they will be receiving a star on the Hollywood Walk of Fame in 2019. Some of these stars already have a star from back in the day! Among the group include Robert DeNiro, Dolly Parton, and Lupita Nyong’o.

The Hollywood Chamber of Commerce’s Board of Directors selected the star winners from several nominations. All stars chosen must commit to being present when the star is unveiled. They have two years to secure their individual unveiling dates.

Dolly Parton is one of the celebrities to already have a star, her first being in 1984. Other memorable names that will be featured on the Walk of Fame are Pink, Michael Bublé, Idina Menzel, Daniel Craig, Mandy Moore, Tyler Perry, and many more. Dolly Parton, Linda Ronstadt, and Emmylou Harris will receive a trio star in recognition of their successful Trio series.

The entire Walk of Fame class can be found below:

“The committee always tries to select a group of talented honorees that appeal in various genres of the entertainment world,” committee member Vin Di Bona said about selecting the honorees.

“I feel the committee has outdone themselves and I know the fans, tourists and the Hollywood community will be pleased with our selections.”

What do you think about the Hollywood Walk of Fame honoree announcement? Be sure to SHARE this with your friends and family if your favorite celebrity was chosen!

Previous article: Get Ready For July 4th With These Facts You Never Knew About Fireworks
Next Post: Paris Jackson Writes Touching Tribute To Her Grandfather And Shares His Final Moments