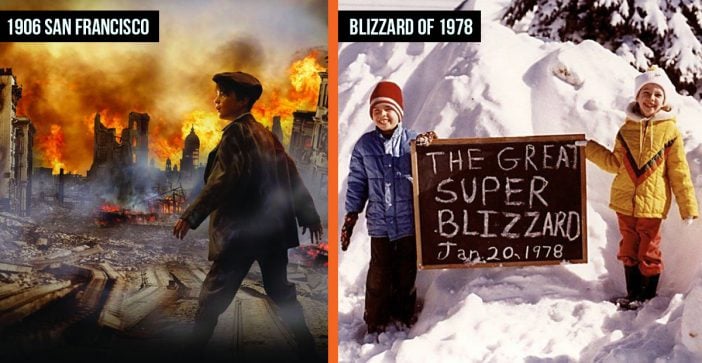 Some natural disasters devastate everything in their path and the ones on this list are no exception. Some of these happened so long ago, you may not remember them or you may have never heard about them in the first place. Let us know which ones you remember!

Here is a list of the top natural disasters to happen in the United States.

1. Earthquake and tsunami in Hawaii

In 1946 a large earthquake triggered a tsunami in Hawaii. The end result was bad damage, destroying almost a third of the city of Hilo. 96 people in the city died as a result of this crazy natural disaster.

Many of you may remember how hot it was in the summer of 1980, especially if you lived in the south. Temperatures in Texas and Tennesee, for example, stayed at over 100 degrees Fahrenheit for over 40 days. This hottest summer on record caused over 1,700 deaths and more than $20 billion in agricultural damage. Yikes!

Let’s go back over 100 years and change the temperature. This was one of the deadliest blizzards to ever hit the United States and it happened in 1888. The east of the country got nearly five feet of snow and 45-mile-per-hour winds. More than 400 people died because of the downright cold and dangerous conditions.

Several years later, the country experienced another dangerous storm. This one is actually in the books as the deadliest natural disaster in American history. This was a hurricane on Galveston Island and Texas that claimed somewhere between 6,000 and 12,000 lives.

In the early 1900s, there was an earthquake that was so massive it started fires that destroyed most of San Francisco. The earthquake actually only lasted about 42 seconds but destroyed the water mains which made it hard for firefighters to put out the fires that happened shortly after. Between 700 and 3,000 were found dead.

The Blizzard of 1978, also called a White Hurricane, was a huge winter storm that hit Ohio and the Great Lakes regions from Wednesday, January 25 through Friday, January 27, 1978. It was one of the craziest winter storms ever recorded in this region and had about 71 fatalities. It also had the third lowest non-tropical atmospheric pressure ever recorded. The barometer fell to 956.0 mb (28.23 inHg) on January 26.

Which of these natural disasters do you remember?

If you liked this article, please pass along to a friend!