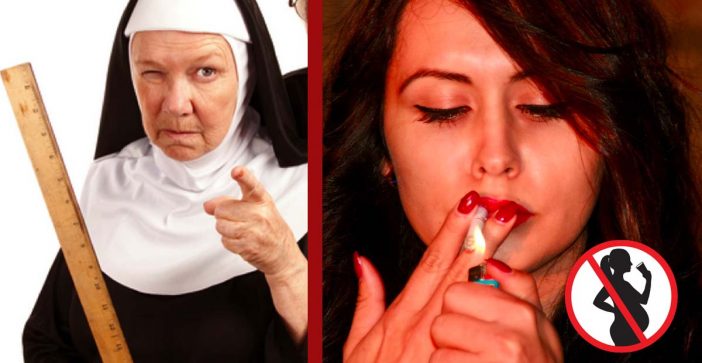 It’s clear that in comparison to the 1960s, people do things a lot differently today! Whether you were a kid growing up or an adult living the American dream, life in the ’60s was a lot different than in 2018.

It’s worth mentioning that although things were done differently back then, some things they did were questionable and even downright terrifying! Many of these things that used to be done back in the ’60s are now considered illegal. Here are 10 interesting things that people in the ’60s used to do!

Expecting mothers flaunted drinking and smoking pretty much anywhere. This caused a ton of fetal alcohol syndrome conditions, and you were lucky if you made it out healthy and in one piece.

2. Nobody child-proofed their homes

Pretty much nothing was childproofed back in the ’60s. Once the babies got to the floor, everything was fair game. Child proof medication lids didn’t exist and neither did special latches for cabinets or drawers.

3. Kids walked to and from school alone

Carpooling wasn’t really a thing back in the day. Kids were sent off to school as young as first grade. Occasionally, they’d walk with a friend or sibling, but parents completely trusted their kids to be 100% safe walking to and from school on their own.

4. Nuns smacked you if you were bad

If you displayed any bad behavior at Catholic school in the ’60s, you got your knuckles slapped with a wooden ruler. Another classic nun move was pulling you out of the room by your ear.

Hitchhiking was a popular means of transportation back in the ’60s. No one worried about the potential dangers of getting into a car with a stranger. Many kids would even use this form of transportation to get a free ride back from school.

In the ’60s, no one used sunscreen. It was a free-for-all with tanning and soaking up the sun. Some people would use baby oil with iodine mixed in to make sure they baked well in the ultra-violet rays, while hoping to prevent any burns.

7. Kids played outside in the streets

Games like street hockey, hopscotch, and even hide-and-seek were played right in the middle of the street. In addition to that, parents often didn’t supervise their kids playing outside.

8. Parents spanked and hit their children

Similar to a nun smacking your knuckles with a ruler, spanking and hitting were appropriate forms of punishment for bad children. Usually it was just a slap in the back of the head or a whack across the butt with a belt. This soon was deemed an abusive form of punishment, although spanking is still used sometimes today.

9. People ate a lot of sugar

Nowadays, the sugar-free diet tends to be the most sought-after lifestyle in order to lose weight and become healthier. Back then, a bowl of sugar was put on the breakfast table to add to your already pre-sugared cereal.

10. Kids would go to their friends’ houses without supervision

All you had to do was hop on your bike and tell your mom you’re going to so-and-so’s house. As stated before, parents didn’t supervise their children, and as such were allowed to go over their friends’ houses without an escort. Parents just didn’t worry about potential dangers of letting their kid out on their own!

Did you remember doing these things in the 1960s?? Be sure to SHARE this with your friends and family if you did!