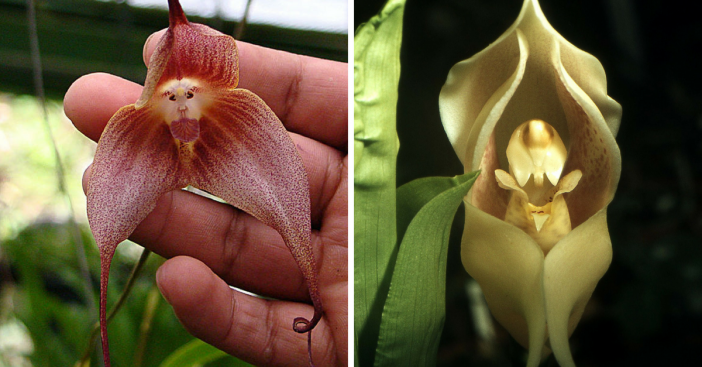 Flowers are beautiful. They are one of those things in nature that add such an amazing creative element to the world. We love to look at flowers, smell flowers and buy flowers for others. There are so many different types of flowers and some of them look so unique. Here is a list of flowers that don’t even look like flowers at all! This could be an example of Pareidolia, a psychological term in which your mind sees something and sees a similar pattern.

For example, the first flower on this list is called a Monkey Orchid (Orchis simia) and it actually looks like a monkey face! There are a few different variations of colors and patterns, but the flower always has a pattern that looks like a little monkey. How adorable is that?

The next flower on the list is a Moth Orchid (Phalaenopsis). This one appears to have moth wings and comes in a variety of colors as well.

The third flower is called the Naked Man Orchid (Orchis italica). It actually does look like a little naked man!

The next one is crazy! It really does look like red lips forming a kiss. Have you ever seen a flower like this?

The next flower is similar to a naked man orchid, but this flower is called the Dancing Girl Orchid (Oncidium). The flower appears to be a girl in a yellow dress and a hat.

Bee Orchid (Ophrys apifera) looks just like that… a bee. Can you believe this flower is even real?

The next flower is the Swaddled Babies (Anguloa uniflora). It actually looks like a swaddled baby in a crib. The flower also comes in a few other colors, but yellow is the most common.

This is a rare flower called the Parrot Flower (Impatiens psittacina). If you look closely you can see the resemblance to a parrot.

If you are a Star Wars fan, you might like this next flower. It is called the Darth Vader Flower (Aristolochia salvadorensis) and it has the look of Darth Vader’s mask.

What do you think of these flowers? Did they blow your mind? Which one is your favorite? If you enjoyed this article, please share with a friend!