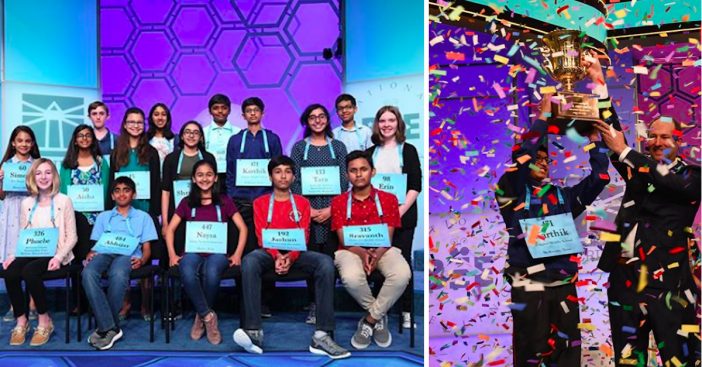 Can you spell winner? The champion of the 91st annual Scripps National Spelling Bee has officially been crowned. The 14-year-old winner from Texas won the biggest spelling bee in the history of the tournament.

On Thursday night, Karthik Nemmani sealed the deal after correctly spelling the word koinonia. In case your vocabulary isn’t quite that expansive, the meaning of koinonia is “Christian fellowship or communion, with God or, more commonly, with fellow Christians.”

Karthik was not expected to win the spelling bee. According to ESPN, Karthik didn’t win his regional spelling bee or even his county spelling bee. However, he still qualified for the Scripps National Spelling Bee and beat out the expected winner, Naysa Modi.

The competition came to an abrupt end when Naysa misspelled bewusstseinslage. Can you blame her though? Who uses the word bewusstseinslage instead of just saying “a state of consciousness or a feeling devoid of sensory components.”

Winning the Scripps National Spelling Bee this year is a big deal, as the competition had the largest turnout in the history of the competition. Over the course of three days of competing, there were 515 hopefuls. Can you imagine being the final one standing at the end of it all?

Karthik was cool under pressure and got word after word right. He even managed to get ankyloglossia, which means “limited normal movement of the tongue chiefly due to an abnormally shortened frenulum.”

He was invited to the spelling bee, even though he didn’t win his regional competition, through the RSVBee invitation, which invited people who were in the top of their regional tournament.

The Scripps National Spelling Bee first took place in 1925 and was originally called the Scripps Howard National Spelling Bee. It was started as a consolidation of numerous local spelling bees. It has taken place annually every year since its inauguration, except for 1943 to 1945, due to World War II. Did you know that even though it is a national spelling bee, contestants from The Bahamas, Canada, the People’s Republic of China, India, Ghana, Japan, Jamaica, Mexico, and New Zealand have competed for the trophy in recent years?

Congrats to Karthik Nemmani on his win! Hopefully, he invests his $40,000 in winnings to save up for a good college.

Previous article: Actress And Model Brigitte Nielsen Announces She’s Expecting Her 5th Baby At 54
Next Post: Inside Of This Home Has Not Changed Since 1966, And People Are Stunned When Owner Gives A Tour