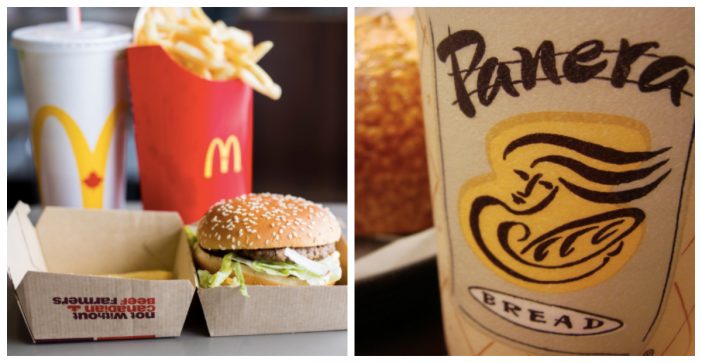 Popular chain restaurants like McDonalds and Panera contain some of the most sought-after food in America. From burgers, to fries, to shakes, to everything in between, it’s hard to not crave it every once in a blue moon!

We’re sure you’ve seen some of the funny, sad, and down-right disgusting truths about chain restaurants. However, there are some things you may not have heard about your favorite places!

I’d still rather go with the salad.

2. A 30 oz McDonald’s sweet tea holds as much sugar as two Snickers bars.

Dang! We all thought we were being healthy by getting tea instead of soda!

3. There’s a secret menu item at Chipotle called the “quesarito.” It’s a burrito wrapped in a cheese quesadilla instead of the typical tortilla. I could go for that right now…

Um, sign me up! I’m all for this burrito/quesadilla mix. The more cheese, the better.

4. After Colonel Sanders left KFC, he grew to hate the company the food itself. He said the food was the worst chicken he’d ever seen and it tasted like ‘wallpaper paste.’ Yikes!

Yet it’s still one of the most popular chain restaurants in the US!

I bet all the money in my bank account that I never would have thought of that.

6. Prior to 2013, Pizza Hut was the number one buyer of kale. They didn’t even serve it! They just used it as decoration for their salad bar.

Isn’t that sort of a waste? Calling all vegans — we found your kale!

7. At a Dunkin’ Donuts in South Korea, they ran an ad campaign that consisted of spraying coffee scents onto buses the same time that the store jingle played. This led to a 16% increase in visitors and a 29% increase in coffee sold. Innovative!

If I ever open my own coffee shop, I’m totally doing this.

8. Singer Jason Mraz owns an avocado farm and sells around 30,000 pounds of avocados per year to Chipotle.

This is probably why guacamole costs extra. It’s coming from Jason Mraz.

Click through to the next page to find out more fascinating facts about chain restaurants!

Page Page 1 of 2
Previous article: Duchess Of Sussex Meghan Markle Was Just Given Her Official Royal Coat Of Arms
Next Post: Food Expert Reveals The Smartest Way To Cut Watermelon For Summer Parties