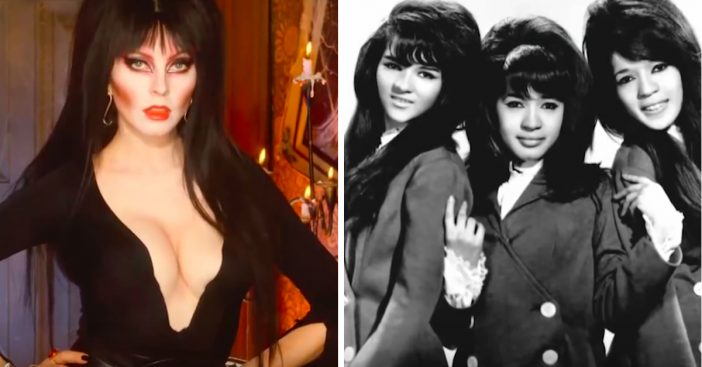 Before Cassandra Peterson was Elvira, she was a struggling actress that was working as part of an comedy improv group. She convinced her parents to let her start her career as a showgirl in Las Vegas, Nevada when she was just 17 years old. In fact, while working there, did you know that Elvira briefly dated Elvis Presley?

She had a small role in the James Bond 1971 film Diamonds Are Forever and had a topless part in The Working Girls in 1974. It wasn’t until the early ‘80s that Cassandra became Elvira and a star was truly born.

Elvira, a true Mistress of the Dark

Cassandra felt that the Fright Night producers liked her because she was a comedian and they wanted someone who had comedy experience. The other people auditioning were trying to be too seductive, that Cassandra was able to nail both the seductive side and the comedy.

The ins and outs of Elvira’s recognizable appearance

Working with her best friend, Robert Redding, Cassandra came up with the sexy, punk vampire after her original idea to look like Sharon Tate in The Fearless Vampire Killers was rejected. They actually took inspiration for the look from the band the Ronettes, mirroring the beehive look and pushing hair height to new levels.

Her character quickly gained attention for the low-cut, cleavage-baring dresses she wore. Cassandra actually couldn’t believe they let her wear the outfit, but when she did, ratings went through the roof. The costume was a little uncomfortable — it was skin tight and she wore six-inch heels.

To see more of how Elvira came to be, you can watch the video below! As of today, Elvira mostly does voice work and has lent the voice of Elvira to several projects, including video games and films, such as Call of Duty: Infinite Warfare and the film Scooby-Doo: Return to Zombie Island. Cassandra also published her autobiography, Yours Cruelly, Elvira: Memoirs of the Mistress of the Dark, in September 2021.

If you liked this article, you can SHARE it with your friends and family on Facebook today.

Previous article: A Timeline Of Roseanne Barr’s Whirlwind Career Through Photos
Next Post: ‘The Little Rascals’: Spanky’s Pup Petey Was Poisoned By Someone Who Hated His Owner