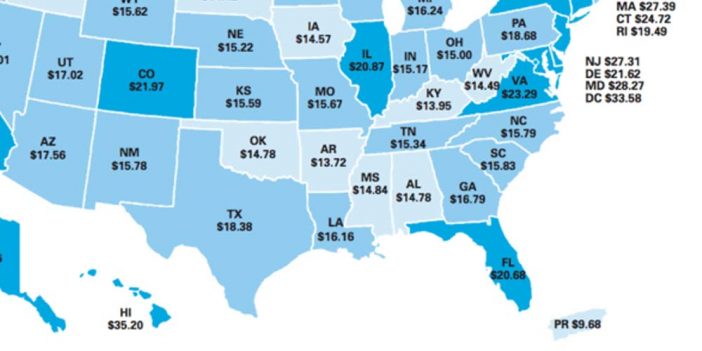 This story was originally written by Sophia Perez for Shareably.net

Ever wondered how much you’d have to make per hour to live in, say, New York City? How about Austin, Texas, or Nashville, Tennessee, or *gasp* San Francisco, California?

Here’s the hourly rate you would need to earn to comfortably live in a two-bedroom home:

Some places are definitely more affordable than others, but according to a recent report released by the National Low Income Housing Coalition (NLIHC), if you’re an American full-time worker making minimum wage, you’re going to be struggling no matter where you live.

The NLIHC has been around since 1974 and is “dedicated solely to achieving socially just public policy that assures people with the lowest incomes in the United States have affordable and decent homes.”

According to their most recent “Out of Reach” report, people who work full-time making minimum wage can’t afford a two-bedroom rental home anywhere in the country without spending more than the recommended 30 percent of their income on housing.

“[The report] shows why millions of low-income renters are struggling to afford their homes,” explained NLIHC president Diane Yentel. “We have the resources to solve the affordable housing crisis in America by rebalancing the federal housing expenditures to serve our country’s most vulnerable households. We lack only the political will to do so.”

The availability of housing has also become an issue.

“The supply of rental housing has not kept pace with demand over the past decade. The shortage is greatest for those with the lowest incomes,” reads the report. “The U.S. has 7.5 million affordable rental homes for the 11.4 million extremely low-income renter households.”

The report also found that in 46 states, the hourly wage needed to pay the bills for a “modest” two-bedroom rental is over double the federal minimum wage ($7.25/hr).

The scariest statistic: An American making the federal minimum wage would have to work an average of 117-hour weeks, every week of the year, to afford that modest two-bedroom rental property.

That would mean working an average of just under 17 hours a day. Even if two full-time, minimum wage-earning partners teamed up, they still wouldn’t be able to make their rent without working overtime.

Check out this map that sorts states by how many hours of work at minimum wage would be required to afford modest housing:

The minimum wage has never allowed for a comfortable quality of living, but it’s reached a new low in our times. According to CNBC, the federal minimum wage in 1968 would have been equivalent to $10.90/hr in 2015- about 50% higher than our current minimum wage.

Previous article: Nicole Kidman Knew She Wanted To Marry Keith Urban After 1 Month Of Dating
Next Post: Royal Family Shares Two Brand New Photos Of Prince Louis (And He Couldn’t Be Any Cuter)