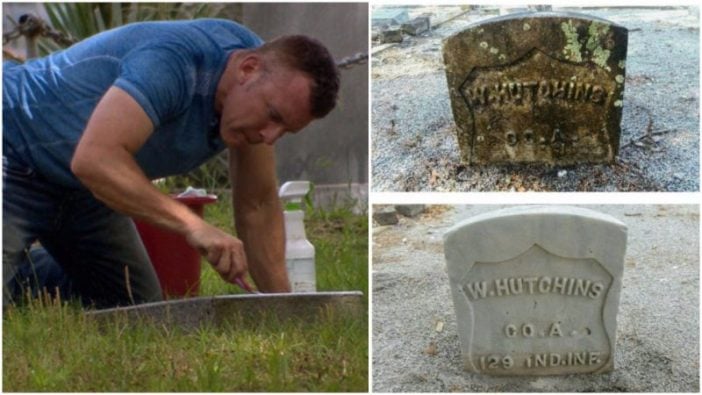 This story was originally written by Peter Huevo for mutually.

Many Americans respect and honor fallen veterans in their own way. Whether it be parades, ceremonies, or monuments. However, many people forget to honor and take care of the graves that stand as the last visual marker for many of these fallen saviors. The Good Cemeterian, Andrew Lumish, takes time out of his own life to go around and clean the tombstones of veterans all over the Tampa Bay area.

These images are an example of one of the graves that Andrew has had his hand with. Andrew runs a carpet and upholstery cleaning service in Tampa, Florida and only spends his only day off cleaning the graves of passed away veterans even dating back to the civil war.

Working hard to run his own business, Andrew takes the same vigor when cleaning the tombstones of the deceased. Andrew first rinses the headstones with water then sprays them with a cleaning chemical compound called D/2. Just like someone scrubbing soap scum from their tile in the shower, Andrew scrubs away years of mold, dirt, and decay.

As said before, Andrew cleans the stones of even the oldest of graves. This image of a tombstone for a veteran from the late 1800s wasn’t even readable anymore. That is, until Andrew got his hands on it. The once pitch-black tombstone now shines in the sun with a brilliant silver gloss that looks like the tombstone was made only yesterday.

4. Glowing in the night.

What once was a dark cemetery, is now brightened throughout the night be these newly cleaned headstones. Rain brings algae, and the stone used to make tombstones absorbs and holds on to a large amount of the moisture during storms. Because of this, a thick layer of algae and moss will begin to grow on tombstones. However, once Andrew works his magic on them, they glow with a luster that makes night time at a cemetery seem like its day.

Andrew says that he studied how to properly clean gravestones in his free time. He uses the same techniques and chemicals that all the national cemeteries in the U.S. use on their gravestones. Andrew admits that doing this work is not easy. It can take as long as 3 months to fully restore an untouched gravestone.

Andrew is not alone when in his endeavors to restore the gravestones of fallen veterans. His wife accompanies him almost every Sunday to support him and help in any way that she can. Furthermore, Andrew posts before and after pictures of all the graves he restores on his Facebook page. His page has amassed a large following of people who cheer him on as he works to respect fallen American heroes.

Previous article: 8 Warning Signs That You Are Not Drinking Enough Water
Next Post: 5 Things You Never Knew About Tim McGraw and Faith Hill’s 3 Kids