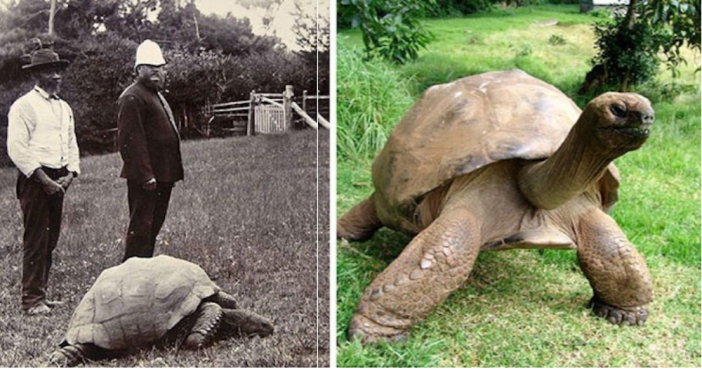 This story was originally written by Laura Geggel for livescience.

The world’s oldest living animal has been given a new lease of life after a vet put him on a healthy diet – at the age of 183. It was feared Jonathan the giant tortoise was on his last legs after his health seriously declined due to losing his eyesight and sense of smell.

At 183 years old, Jonathan, who resides on the tiny Atlantic island of St. Helena, is now eating like a king. Until recently, the giant tortoise munched on twigs, leaves, and grass, an unhealthy diet for such a large and aging tortoise. But now, he’s being served a more nutritious menu, including apples, carrots, cucumbers, bananas, and guava, according to National Geographic.

Before the diet change, Jonathan’s keratin beak was blunt and soft, making him an inefficient grazer, Dr. Joe Hollins, the veterinarian who cares for Jonathan, said in a 2012 report in the journal Veterinary Record. But a better diet helped the tortoise develop a sharper bite.

“His once blunt and crumbly beak has become sharp and lethal, so he was probably suffering from micro deficiencies of vitamins, minerals and trace elements,” until the diet upgrade, Hollins said in a statement.

One from the album: Jonathan back when he was middle-aged

Jonathan’s life may be long, but it hasn’t been easy. He was born in the Seychelles archipelago in the Indian Ocean. In 1882, the tortoise was given as a gift to the governor of St. Helena, an island slightly larger than Manhattan that was once inhabited by an exiled Napoleon Bonaparte, as well as more than 5,000 Boer War prisoners, according to the Seychelles News Agency.

Jonathan was about 50 years old when he arrived on St. Helena. Since then, other tortoises, including David, Emma, Frederika, and Myrtle, have joined him. But as Aldabra giant tortoises, they’re unable to mate with Jonathan, the agency reported.

Nowadays, the “brittle old gentleman” is blind from cataracts and has lost his sense of smell. But the tortoise still has excellent hearing, Hollins said.

“Once weekly I hand-feed him to boost his calorie intake,” Hollins wrote in the report. “After his meal, I wipe his chin, scratch his throat and wish him well.”

Seychelles giant tortoises have a life expectancy of 150 years, but Jonathan appears to be going strong. Other long-lived animals include the hydra (a marine animal that may be immortal) and an approximately 4,200-year-old deep-sea coral living off the Hawaiian coast.

Previous article: The Real Story Behind Johnny Cash And His Iconic Song, “Ring of Fire”
Next Post: 8 Warning Signs That You Are Not Drinking Enough Water