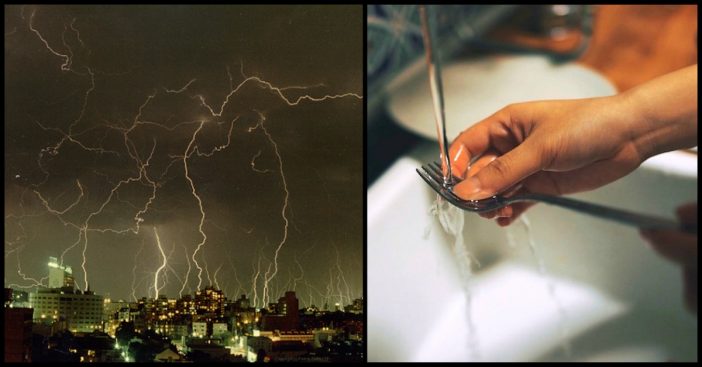 Thunderstorms can be beautiful, scary, and overwhelming. Everyone reacts differently to thunder and lightning; some people love storms, while others absolutely hate them. Most people can agree that being outside during a thunderstorm isn’t the most fun, though. Plus, it can be dangerous to be outside during a bad thunderstorm.

When it’s dark and stormy out, most people hunker down inside. It can be a great time to read a book, take a nap, or catch up on some chores. You have to be careful, though; for example, you should never wash dishes during a thunderstorm.

Why not? Well, in the simplest terms, because it’s dangerous. If lightning strikes your house, the electric surge can travel through pipes and water and actually shock you!

Jensenius explains, “Water can conduct electricity as well. We see that on the outside where lightning strikes something and if there are puddles around, it can easily electrocute somebody nearby the puddle.”

So washing the dishes isn’t the only thing you shouldn’t do; it’s better to avoid all running water during a storm, just to be safe. Yes, you can still flush the toilet, but try waiting until the storm is over before you shower.

Did you know about this danger, or is this news to you? Share this article with any of your friends who need to know this information!

Previous article: At The Age Of 96, Betty White Reveals Her Secret To Staying Young
Next Post: Sears Is Closing Its Last Store In Its Hometown Of Chicago