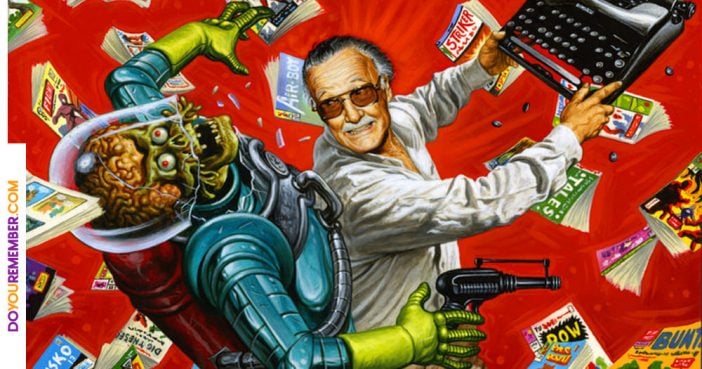 Stanley Martin Lieber aka Stan Lee was born today in 1922 in New York City, in the apartment of his Romanian-born Jewish immigrant parents. Not too long after his brother Larry was born. By the time Lee was in his teens, the family was living in a one-bedroom apartment in the Bronx.

In his youth, Lee enjoyed writing, he was influenced by books and movies, particularly those with Errol Flynn playing heroic role and dreamed of writing The Great American Novel. But before that he had to earn a living and took on a series of odd jobs to so like writing obituaries for a news service delivering sandwiches to offices in Rockefeller Center; ushering at the Rivoli Theater on Broadway; even selling subscriptions to the New York Herald Tribune newspaper.

But the time he was 17 he graduated from high school, and with a little help of his uncle Robbie Solomon, Lee became an assistant in 1939 at the new Timely Comics division of pulp magazine ,the company that would later become Marvel Comics.

At first his position was filled with menial tasks, mostly making sure the artists had all they need, ink, lunch, you name it, Stan was at the ready. It wasn’t long till Lee was given the opportunity to show of his writing talents.  He made his comic-book debut with the text filler “Captain America Foils the Traitor’s Revenge” in Captain America Comics #3 (May 1941), using the pseudonym Stan Lee, which most of us know he later adopted as his legal name.

From there Lee moved on from writing filler to actual comics. Just as Lee seemed to be catch his footing he was made editor at just 19 years old. A positions thrust upon him after the  then editor and publisher Martin Goodman got into a squabble. And there Lee stayed till about 1972 when he succeeded Goodman as publisher. And it was during this time that Lee not introduced the idea of a flawed hero. Heroes that carry the same kinds of worries we do, girl/boy problems, paying rent, etc.

It was this that set Lee’s creations apart. And the rest was comic book, media empire history…