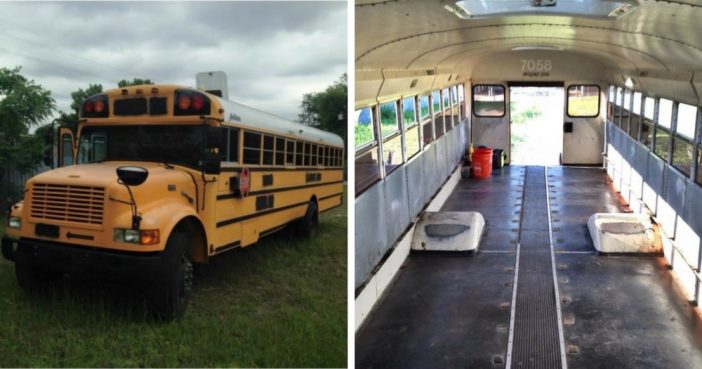 Remember those days when you sat on the school bus, with tons of dreams and aspirations racing through your mind? Well, it looks like one man has literally used a school bus to make his dream come true.

The man paid just $2,200 for this rusty old school bus and with a lot of hard work, creativity, and a little help from his friends, transformed it into something completely different. This is about a man who has finally found his place in the world – on a school bus.

Designer, Not A Builder

The genius behind this transformed school bus actually has next-to-no experience when it comes to construction. Michael Talley’s skills lie in design, so you would expect him to stay miles away from the hands-on side of the job. “I have never built anything,” Talley said. “Ever. I’ve helped paint a few houses on mission trips and I helped install some plastic lattice once, but that’s about it.” When Talley decided to invest in the bus, he was venturing into uncharted territory.

Going Back To School

Michael Talley’s goal was to build a new home for himself. However, he wanted to use a preexisting structure as the foundation. In the end, he went with an old school bus. “Ultimately I decided upon a school bus because I thought ‘Hey, there’s already four walls and a roof,’” he said. “‘Throw some wood and some light bulbs in there and call it a day.’ How foolish of me. I ended up doing a complete build on the back of the bus.”

Living In A Tent

In order to invest in his new project, Talley chose to move out of his cheap apartment and move into a tent. “When I bought my bus I was living in a studio apartment in North Austin for around $1200 a month including rent and bills,” he said. “I moved into a tent in order to save money while working on the bus, commuting 40 minutes to work every day, just to afford more steel and more wood.”

Between September 2015 and September 2016, Talley went through a lot of changes. It was during this time that he lost many important things. These include his girlfriend, his job, and even his grandpa. “It was really a difficult time,” he said. “But luckily all I really had was this bus and the bus was all I had, and I put everything I had into it.” For Talley, the bus symbolizes a fresh start and he was determined to do it right.

Talley knew that the odds were stacked against him to successfully complete this project. With a pile of scraps and old furniture to work with, he knew that he needed to start from scratch. “I had never built anything before,” he said. “I couldn’t sleep for months because my brain was constantly going a mile a minute about how to build this and what I was going to do to build that. It was the hardest thing I’ve ever done.”

Early on during the build, Talley’s removal of the seats turned the bus into a completely empty vessel. This was the first time that he saw the bus’s full potential. “The grueling process that was removing all those seats. Props to my stepdad for crawling under the bus and helping me remove every single bolt,” he said. “If I did this again I would have used an angle grinder, but this was still only days into the build and I was terrified of power tools.

At just $2,200, the school bus that Talley purchased had the potential to be the bargain of the century. He knew this as soon as he handed over the cash. “I purchased the bus from the Austin Independent School District for a cool $2,200 off PublicSurplus.com,” he said. “They had recently switched to this auction site to do a test run of 10 buses to see if they like it. Fortunately for me, not many people knew they were doing this, so I made out like a bandit.”

Page Page 1 of 6
Previous article: New Study Says No One Over This Age Should Wear Jeans
Next Post: Woman Gets Married In Wedding Gown And Puts It Back On 60 Years Later