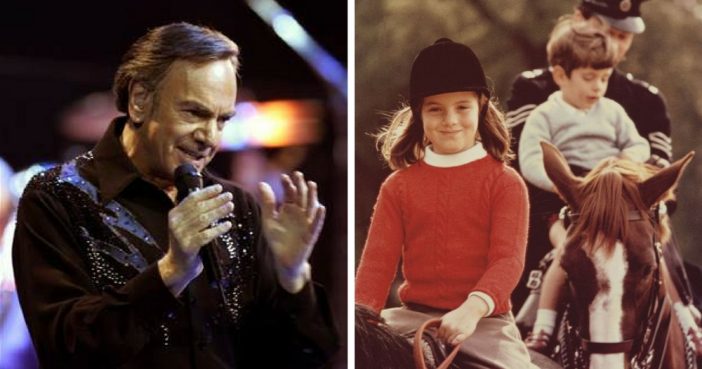 ‘It was a picture of a little girl dressed to the nines in her riding gear, next to her pony,’ he said at the time. ‘It was such an innocent, wonderful picture, I immediately felt there was a song in there.’

Years later, holed up in a Memphis hotel, Diamond reportedly wrote the words and music to ‘Sweet Caroline’ in less an hour, before releasing it on September 16, 1969, as a single.

It has since become a staple track – particularly at sporting events – and had sold a staggering 1,745,000 digital downloads as of April 2013.

In 2007, Diamond, who was born in Brooklyn, New York, performed the song to Miss Kennedy at her 50th birthday celebrations.

And last year, he announced that he would donate all royalties since the Boston Marathon bombings on April 15, 2013, to One Fund Boston to help those most affected by the attacks.

The singer appeared on the TV show to promote his first album release in six years, ‘Melody Road’, which was launched on October 21 by Capitol Records and is his 32nd studio album to date.

‘I was a nervous wreck going into this new album,’ Diamond said. ‘I had 40 or almost 50 years of songwriting to match up to.’

Tribute: In 2007, Diamond performed the song to Ms. Kennedy (pictured) at her 50th birthday celebrations.

Successful: Last year, Diamond (pictured) announced that he would donate all royalties since the Boston Marathon bombings on April 15, 2013, to One Fund Boston to help those most affected by the attacks.

When asked if he is planning to release any more albums in the future, he added: ‘I hope so, I hope so, I mean I’m still writing and that’s a good clue.’

Diamond had two sons, Jesse and Micha, with Miss Murphey before they divorced in the mid-nineties. He had earlier had two daughters, Marjorie and Elyn, with his first wife Jaye Posner.

The singer married his third wife, Katie McNeil, in Los Angeles in April 2012.