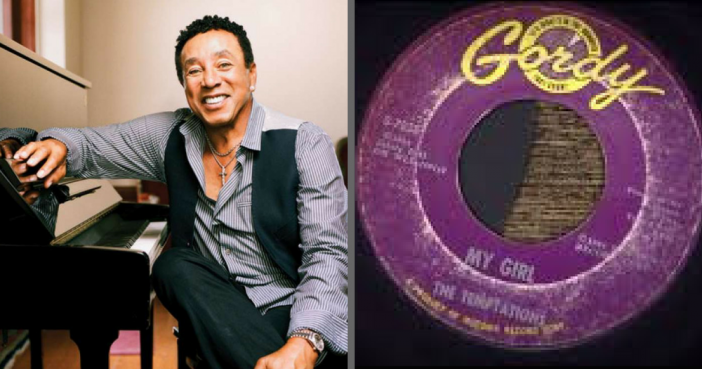 It’s almost impossible to think of the song “My Girl” without immediately humming those first few notes of its iconic opening riff.

The song was released in 1964, becoming one of the biggest hits to come out of Berry Gordy’s Motown — “My Girl” became a best-selling single, and by 1965, rose to the top of the Billboard charts, became The Temptations’ first number-one song and marked the first time the label itself landed a number-one hit with one of their male vocal groups. Even today, more than 50 years after its release, “My Girl” still stands out, ranking among the best songs of all time.It is still a song that gets stuck in your head and heart by all generations alike.

A big part of the song’s success was its writer, Smokey Robinson who was one of Motown’s big songwriters/producers at the time; he was also the lead singer of his own vocal group, the Miracles. Although he could have used the song for his own group to sing, Smokey never intended to keep “My Girl” for himself — it was always meant for his so-called competitors.

Many believe that the infectious tune was written by Smokey Robinson, about women. Afterall, who wouldn’t with a title like “My Girl?” But in a 2015 interview, Robinson clarified that the tune, in fact, was written for its eventual performers, the Temptations.

As Smokey explains, “he was so enamored with the group’s vocals that he simply had to write a song for them.” Robinson explained that any writer or producer could go up to an artist with a song. This bred competition, and so artists would get to pick the songs they believed were going to be chart-toppers. Motown competition may have been fierce, but it was incredibly common for everyone to work together in a collaborative effort to strike gold with a big hit, in turn, producing more successful singles, one of which included “My Girl.”

“It would be nothing for us to go into the studio and help one of our competitors with a song that they were working on, with an artist that we were working on,” Smokey says. “We all did that, for each other.”

In fact, Motown’s policy was that no one had a lock on a particular artist; any writer or producer could choose to work with any willing artist. This is what happened with Smokey and The Temptations. He very deliberately wrote “My Girl” for them.

“Were it not for The Temptations, I never would have written ‘My Girl,’” Smokey says.