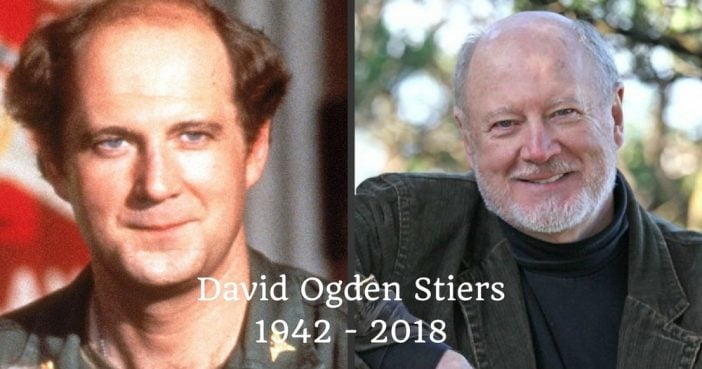 David Ogden Stiers, who played Major Charles Emerson Winchester III in M*A*S*H and later Cogsworth in Disney’s Beauty and the Beast, has died. He was 75 and died at home, according to his agent, Mitchell Stubbs.

“My dear friend and client of 30 years is gone,” representative Mitchell Stubbs of Mitchell K. Stubbs & Associates said in a statement to THR on Saturday. “David had wisdom and talent in so many different areas. I wish people could know the beautiful heart that he had. His friends and family knew, as he told us so.”

The late actor was born in Peoria, Illinois, then moved to Eugene, Oregon while he was in high school. He attended the University of Oregon but soon left for San Francisco to pursue an acting career.

That led to what became his biggest role. In 1977, Stiers joined the cast of M*A*S*H after the departure of Larry Linville, who played Frank Burns. Stiers was nominated for two Emmy awards for his role as the stuffy Winchester, in 1981 and 1982.

Stiers would earn another Emmy nomination in 1984 for his role as William Milligan Sloane, founder of the U.S. Olympic Committee, in the NBC miniseries The First Olympics: Athens in 1896. Stiers also lent his voice to eight Disney animated features, most notably as Cogsworth in 1991’s Beauty and the Beast and including Pocahontas, The Hunchback of Notre Dame and Lilo & Stitch.

In addition to his acting career, Stiers was also the resident conductor of the Newport Symphony and guest conducted for more than 70 orchestras across the world.

He continued acting and doing voice-overs until 2015, with credits in video games, cartoons, and television shows.

No details on memorial services or survivors were immediately available.

Tributes and more memories on NEXT page…

Page Page 1 of 2
Previous article: Can You Find All Three O’s In Only 10 Seconds? Prove It!
Next Post: Toddler At Dance Recital Gets Nervous And Forgets Her Moves, Then She Looks Back At Dad