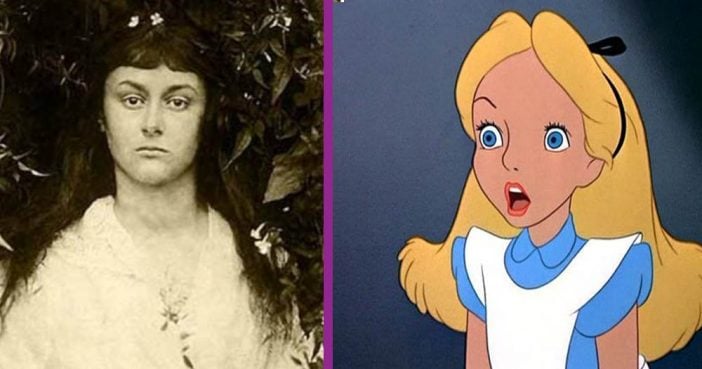 You’re probably more likely to know Charles Lutwidge Dodgson as British author Lewis Carroll. He wrote Alice’s Adventures in Wonderland and its sequel Through the Looking-Glass. But what you may not know is how close a relationship he forged with a young girl named Alice Liddell, the real Alice in Wonderland, and the inspiration behind his novels. This relationship has been heavily studied and scrutinized, with many believing it had Lolita-esque aspirations.

Dodgson wrote under a pseudonym, and the first in the series, often shortened to Alice in Wonderland, centers on the titular character falling into a rabbit hole and meeting a serious of fantastical creatures. The book is one of a few that has maintained its popularity despite being published over 150 years ago, like Laura Ingalls Wilder’s Little House On The Prairie series.

Dodgson wasn’t simply a writer. He studied mathematics at Oxford University and was a skilled photographer. Charles Lutwidge Dodgson photos are interesting due to their subject matter. Over 50 percent of his surviving photographs depict prepubescent girls. Lewis Carroll and children go hand and hand. He loved children, and they loved him. Over the years, many have questioned his relationships with young girls, although there’s no conclusive evidence that he acted on what very well may have been impure impulses.

On April 25, 1856, Dodgson, then 24, first met Alice and her sisters while they were playing in a garden. He later wrote in his diary that the date had a special significance. At the time, he was busy photographing the cathedral, and the girls were drawn to him. The family later asked him to take pictures of them. He had dress-up clothes and toys in his studio to entertain the girls.

On July 4, 1862, Dodgson took a boat ride from Oxford to Godstow with Reverend Robinson Duckworth, and his good friend Henry Liddell’s, three daughters: 8-year-old Edith, 10-year-old Alice, and 13-year-old Lorina. At the time, Dodgson was a mathematician. He was tasked with entertaining the children and created a delightful story with a multitude of strange and unusual characters. He made Alice the protagonist.

In 1960, historian Martin Gardner published The Annotated Alice (revisions were made in 1999.) He noted that Carroll befriended many young girls over the course of his life, but Alice was different from all the others.

“A long procession of charming little girls (we know today that they were charming from their photographs) skipped through Carroll’s life, but none ever took the place of his first love, Alice Liddell. ‘I have had some scores of child-friends since your time,’ he wrote to her after her marriage, ‘but they have been quite a different thing.'”

Dodgson’s apparent fascination with young girls has caused biographers to examine what type of relationships he had with the children he wrote about, took photographs of, and painted. Most of his subjects were girls between the ages of 10 and 15. While much of his photography portfolio is missing, more than 50 percent of his remaining work concentrates on nude or semi-nude portraits of girls. Some suggest this is evidence he may have been a pedophile. Before he died, he wrote, “A girl of about 12 is my ideal beauty of form.”

However, during the Victorian era, it wasn’t uncommon for nude photos of children to be depicted on postcards, birthday cards, or works of art. Children were considered innocent beings. These depictions were not of a sexual nature but of chastity and purity.

In 1863, something happened between Dodgson and the Liddells that severed their relationship for quite some time. Prior to that, he saw the children nearly every day. Scholars don’t know what caused the rift, but Dodgson stopped socializing with the Liddells for several months.

Following Dodgson’s death, a page in his diary was removed that may have provided some insight. Florence Becker Lennon wrote in Victoria Through the Looking Glass (1945) that Dodgson may have been interested in marrying Alice, who was 11 years old. His proposal may have scared the family because such a thing was not acceptable, even in the Victorian era.

Dodgson eventually reconciled with the Liddells but never again spent time with their daughters. In 1864, Dodgson gifted Alice his book, Alice’s Adventures Under Ground. The following year, when Alice was 12, Dodgson wrote that she had changed as a person.

Page Page 1 of 3
Previous article: 17 Epic Advertisement Fails On Vehicles That Were Noticed A Little Too Late
Next Post: Famed Evangelist, The Reverend Billy Graham, Has Died At 99