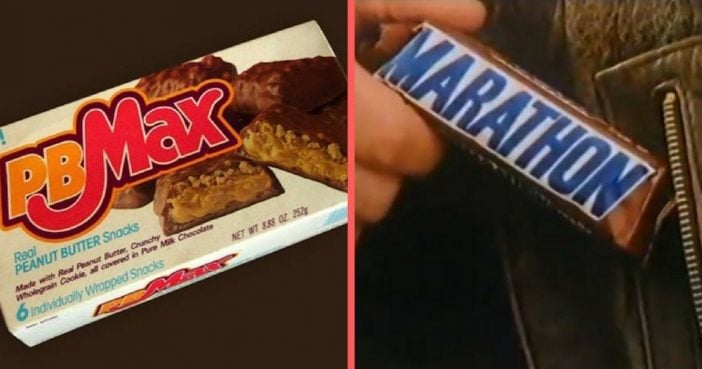 June is National Candy Month, a 30-day ode to the sweet, tart, and sometimes salty corner store concoctions that have been the frequent source of failed diets everywhere.

There are two ways to celebrate: by overindulging in your favorite candies of today and/or by remembering the (for) now-discontinued treats of your past. Even if it’s not June RIGHT now… let’s remember some sweets..

Whatever that means. In 1992, Hershey tinkered with the flavor mash-up a bit, adding an extra wafer and some caramel into the mix. The reformulation didn’t help slagging sales; the candy was discontinued in 1997, though it still maintains a fan base of sweet-toothed admirers hoping for its comeback.

This sugar-coated ode to dumpster diving featured a tiny plastic garbage can filled with Pez-like candy pellets in the shape of items you might actually find in a garbage can (a dead fish, an old shoe, a dog bone, a discarded soda bottle).

Fortunately, this novelty treat tasted much better. Multitasking types loved the fact that, once the candy was consumed, the toy trash can could be used for storing stuff like stickers, erasers and/or Garbage Pail Kids cards (perhaps not coincidentally, both Garbage Can-dy and Garbage Pail Kids were created by Art Spiegelman, the Pulitzer Prize-winning author of Maus, who worked in the product development department of The Topps Company at the time).

First things first: there is not a piece of poultry to be found in The Chicken Dinner Bar. Introduced during the Depression era, the chocolate-covered nut roll’s name was a reference to Herbert Hoover’s prosperity-minded presidential campaign promise of “a chicken in every pot and a car in every garage.”

Despite the candy’s unfortunate name (even the commercials made reference to a clucking chicken and the candy was delivered to stores in a chicken-shaped truck), the candy had some serious legs, remaining on shelves for nearly 40 years. Production ceased only when its original manufacturer, the Sperry Candy Company, was acquired by Pearson’s in 1962.

Bonkers—Nabisco’s chewable fruit candy with a gum-like outer shell and fruity inside—are proof of the power of advertising. Even if you don’t remember the artificial fruit flavor of the candy itself, it’s hard to forget the product’s popular commercial campaign, in which a group of strait-laced characters would be “bonked” into silliness by a giant piece of fruit from above. But when the commercial campaign slowed down, so did the candy’s sales, ultimately leading to a cease in production altogether.

Yet there’s potentially good news on the horizon for fans of this treat as well, as Leaf Brands has struck again! In 2012, the company acquired Bonkers’ manufacturing rights and plans to have Bonkers back on the market by the end of 2014.

Like any food category, candy goes through phases. In the 1980s, this meant a barrage of beverage-flavored chewing gums, including the Gatorade-inspired Gatorgum which, like its beverage predecessor, promised to quench one’s thirst.

While it, too, still maintains a legion of fans, the chewing gum’s super-tart flavor—which could actually hurt one’s mouth on occasion—probably didn’t help its short-lived time on grocery store shelves. Its beverage-themed competitors—including Dr. Pepper Gum, 7-Up Gum and A&W Root Beer Gum—didn’t fare much better.

Another poorly-named relic from the 1920s, re-discovered in Steve Almond’s book Candyfreak: A Journey Through the Chocolate Underbelly of America, is The Vegetable Sandwich Bar.

Unfortunately, unlike the sugary Chicken Dinner Bar, this snack was exactly what it sounded like: Dubbed a “health” bar, the wannabe candy actually contained cabbage, celery, peppers, and tomatoes and was marketed for its ability to aid in digestion and “not constipate.” Mmmm … sounds delicious.

Even diehard white chocolate connoisseurs know that its super-sweet flavor is an acquired taste. And while Nestle did its best to promote the Alpine White bar as a sexy and sophisticated alternative to plain old milk chocolate—as evidenced by their video art-inspired commercial campaign, seen here—not enough customers were biting.

A Facebook campaign to bring the bar back has so far only garnered 3,400 supporters.

Click ‘NEXT’ To See the Rest of the Candy, Including the PB Max!

Page Page 1 of 2
Previous article: 98-Year-Old Turns $1,000 In Stock Into $2 Million And Donates It All To Charity
Next Post: Hidden Face Illusion: A Man And His Daughters