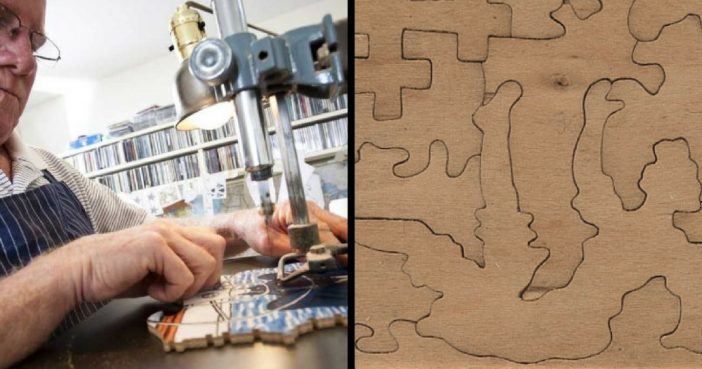 Who would ever have thought a jigsaw puzzle could be worth over $1,000?

The Par Company Ltd. of New York, NY,  literally created exclusive and artsy, complex wood jigsaw puzzles. These collectible puzzles were crafted and cut by Frank Ware and John Henriques from the 1930s through the 1970s and can be extremely valuable!

Frank Ware and John Henriques were known as the creators of the crème de la crème jigsaw puzzle. Their one-of-a-kind line of puzzles they created to cater to celebrities and the elite.

The Par Co. of New York, NY, was started by John Henriques and Frank Ware, who were unemployed during the early 1930’s-The Great Depression years. With incomes depleting, this was a prime time to create challenging puzzles for the public’s amusement. Instead of leaving home for dinner, or hitting the nightclubs, folks stayed home and put together jigsaw puzzles.

Both men loved puzzles and were skilled craftsmen, so, they decided to create complex wood puzzles to amuse themselves and family members. Although crafting and cutting of the wood pieces were considered a quite a tedious task, by 1932 Frank and John were promoting, renting, and selling their unique, quality puzzles. The team of Ware and Henriques perfected the irregular edge of the puzzle, which was a way to frustrate traditional puzzlers who usually began to work on the corners and edge pieces first.

The men used prints of modern art from travel and advertising posters as finished pictures. Frank Ware was the designated artist with John Henriques being the faster and better wood puzzle piece cutter. John H. used special cutting techniques such as dropouts within the puzzle and elevated forms with irregular edges (useful in cutting prints to omit their original printed message). Each of their first puzzles contained a swastika (old Hindu letter character) piece-which was known as their signature piece.

A SWASTIKA! Well, you can imagine this symbol wasn’t a good idea to use during the WWII Era. So it was decided to change the PAR signature piece to a pleasant seahorse shape. Additionally, several of the exclusive PAR puzzles had gold stenciled onto their surfaces.

The Par Co. even made custom puzzles featuring the owner’s own personal monogram on the box along with personal significant dates, and figure puzzle pieces fitting to the owner’s interests.

Some boxes were called “knows”-meaning the boxes used were plain black boxes which were void of cover- guide pictures. A puzzle number was listed only for the Par Co. rental Par puzzles. (The Par library operated for over 30 years-ending in the 1960s.) These rentals would be sold to the public and considerably cheaper than purchasing a new Par puzzle. During the 1930s, the puzzle craze peaked, and in 1933, sales reached an overwhelming 10 million. Drugstores and libraries would charge 3-cents to 10-cents per day to rent “Par” puzzles out, depending on their size.

In 1972, John Henriques died, and Frank Ware gave the entire business to his apprentice, Arthur Gallager.  In the early 1980’s, Gallagher retired, and the business was turned over to John Madden (who worked with Frank Ware and Arthur Gallagher at one time). John and Justin Madden still create Par, one-of-a-kind- custom, hand-cut wooden jigsaw puzzles from a home-based today.

Did you know?  Marilyn Monroe and Buster Keaton both failed to meet the PAR time on their personalized PAR puzzles.

Quote of the day- “It’s always the small pieces that make the big picture complete!”

For more stories from Contributing Writer, Patty Penke, and to see if you have anything worth some money, check out her blog: Turn Trash 2 Cash