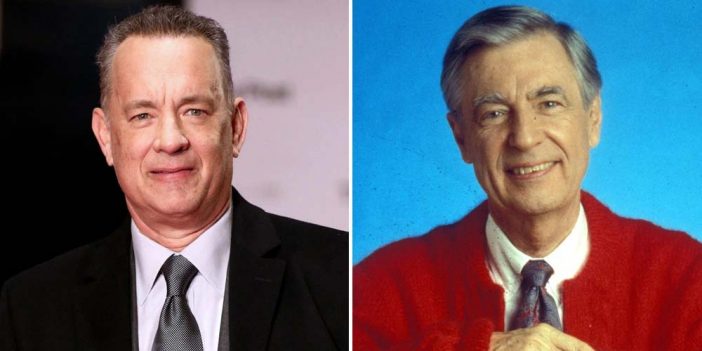 Tom Hanks as Mr. Rogers. It was meant to be.

Hanks is attached to star as Fred Rogers from the pioneering children’s television series Mister Rogers’ Neighborhood, in the film, ‘You Are My Friend’, Sony TriStar Pictures announced Monday.

You Are My Friend, with its title taken from one of Rogers’ signature songs, is inspired by a real-life friendship between Rogers and journalist Tom Junod. Junod is depicted as a cynical scribe who begrudgingly accepts an assignment to write a profile article on the iconic Mr. Rogers. He finds his life-perspective transformed in the process.

Marielle Heller (Diary of a Teenage Girl) will direct from a screenplay by Micah Fitzerman-Blue and Noah Harpster (Transparent, Beautiful Ruins).

“This is the perfect alchemy of talent coming together at the perfect time to remind us all of the transformative power of kindness and respect to heal and to unite,” said Hannah Minghella, President of TriStar Pictures in Monday’s announcement.

Director Heller said in the release, “The script knocked me out with its message of kindness and its exploration of the human spirit. As a mother, I am so inspired by the teachings of Fred Rogers and as a human, I am in awe of his life’s work.”

Film production is set for the fall, with no date released for when the film will hit screens.

Rogers charmed viewers as he slipped into his trademark cardigan and sneakers as host and producer of Mister Rogers from 1968 to 2000. He died in 2003.

Hanks is currently appearing as legendary Washington Post editor Ben Bradlee in Steven Spielberg’s The Post, a role for which he missed out on an Oscar nomination.