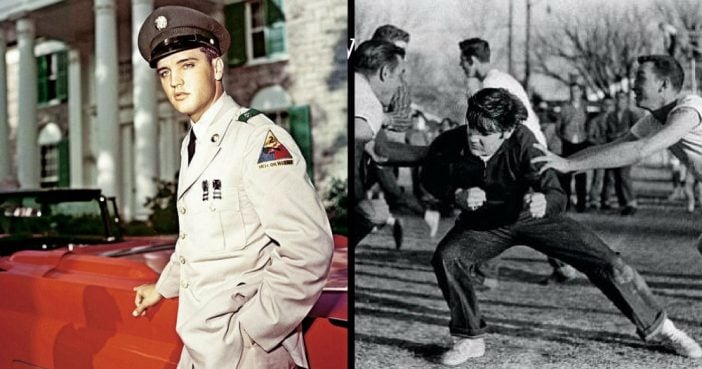 He was labeled ‘Elvis the Pelvis’ for the onstage gyrations that drove his teenage fans to distraction. Others called him ‘swivel hips’. In the end, however, Elvis Presley was known simply as The King of Rock ’n’ Roll – a mantle that has stuck to this day.

Now, over 40 years after his death in 1977 at the age of 42, the Presley family has released Elvis, The Legend, with unique images from the family-owned archives, detailing every aspect of his life.

Not many stars, particularly in the Fifties, were known only by one name. But Elvis was always different.

1. Elvis loved all music, and was a perfectionist who never stopped till the sound was perfect – he did 31 takes of Hound Dog before he was convinced he’d got it right.

2. The Presley family has released Elvis, The Legend, with unique images from the family-owned archives, detailing every aspect of his life.

3. The legendary singer had equally outsized eating habits, including his famous affinity for peanut butter, bananas, and bacon.

5. Elvis poses in his army uniform at Graceland in 1959. While serving in Germany he was allowed to live off base with his father and grandmother. He also employed a secretary to answer fan mail and signed autographs every evening for the fans who gathered outside.

7. Elvis’s talent, good looks, sensuality, and self-deprecating humor endeared him to millions – and that musical legacy lives on today.

Over the following pages, Event pays tribute to The King, with never-before-seen images, personal details and very private tributes to a man the world remembers simply as Elvis.