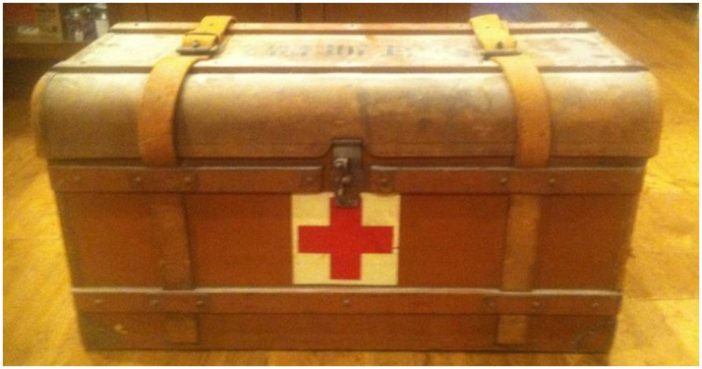 People have found all sorts of amazing things hidden in their attics or basements. Finding an entire chest, though, is something particularly special. It’s not just the fact that these large containers bring up thoughts of the hidden treasure buried by pirates centuries ago. There’s also the mystery of what could be inside! That was the situation that one Imgur user came upon when he found a mysterious chest in his grandfather’s attic. What was inside was quite unexpected, to say the least…

On one otherwise ordinary, rainy day, an Imgur user named John was in his grandfather’s attic helping his parents clear out some junk. Alongside things that you’d typically find in an attic, like old photos and books, there was a weird wooden box with a medical symbol on it. John just had to take a look inside.

What could it have been? Since John’s grandfather fought in the Pacific theater during World War II, he may have brought some antiques back over to the United States. John also noticed characters that weren’t in English. In fact, they looked to be printed in an Asian language…

Indeed, the box belonged to an enemy Japanese soldier. John knew very little Japanese, so he used the Internet to help him translate the text. He discovered that it said something about natural gas—apparently, it had been used for medical supplies.

John shared his story online and immediately received a lot of attention. All sorts of people started to explain their ideas about what it could have been, including a World War II re-enactor whose specialty was field medicine. He even revealed that the box was dated March 1932, long before the U.S. got involved in the war!

As for the medicine chest, it was a replica from Japan’s Showa Era, which lasted from 1926 to 1989 when the country was ruled by Emperor Hirohito. The box was a squad-level field medical kit, designed to be water- and airtight, so if anything was still in there, it should have been in great condition!

Sure enough, there were several boxes within the medical supply chest that remained perfectly organized as they were stacked together. Each bottle and box of pills inside was labeled with Japanese text that John couldn’t decipher.

Page Page 1 of 3
Previous article: 32 Drool-Worthy Comfort Foods From Around The World
Next Post: “Dinosaurs”: The Most Traumatizing Series Finale Ever