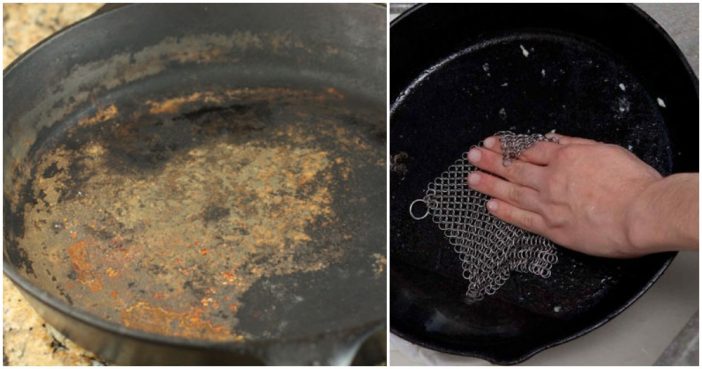 Cast-iron cookware — great for stovetops and campfires, yet so easy to turn into rust-covered garbage if you’re lazy — can be a mystery to those who live in a nonstick world: there is whispered talk of some seasoning process that sounds, frankly, like it might burn the house down and a lot of rules about how — and how not — to wash it.

Countless online forum threads have been devoted to the best oil to use for seasoning, the ideal temperature at which cast iron should be heated to in order to develop a perfect nonstick patina, and the correct methods to use to wash the pan after use. It can all be a little overwhelming, especially because cast-iron devotees make the fervor of political conventions seem tepid.

It’s not that tough… if it was, these relatively cheap, non-toxic, durable, and essential pieces of kitchenware wouldn’t be passed down, intact, from generation to generation. But if you do it wrong, your trustiest cast-iron pot becomes a literal rust bucket. Here’s how you can clean your cast iron without destroying it.

The real enemy is water

But actually, the damage is far more likely to occur because of exposure to water. Yup, water — not soap — will destroy your prized cast-iron cookware.

That’s not to say that you shouldn’t use water at all! You should. But, once the pan has been cleaned of bits of food and grease, the best and most important thing you can do for the health and good looks of your cast iron is to dry it off immediately. Cast-iron pans, even the most artistically seasoned ones, will develop rust at an alarmingly fast rate.

So! Dry your cast iron exceedingly well after cleaning — that’s your Big Rule.

If you really want to ensure you’re doing it right — and you should — after drying, pour a small amount of oil for seasoning cast iron into the pan (Cook’s Illustrated likes flaxseed oil, Lodge brand recommends vegetable oil), rub it in vigorously with a paper towel until the pan appears to be dry, and then set it on a medium flame for five minutes or so. That quick mini-seasoning effort will help to dry the pan, as well as bolster the layer of seasoning which, in turn, will help to prevent moisture in the air from causing the pan to rust.

Page Page 1 of 2
Previous article: Naomi Parker Fraley, The ‘Real’ Rosie The Riveter, Dies At 96
Next Post: These 15 Celebrities Are Long Dead, But Their Spirits Still Haunt Their Old Homes