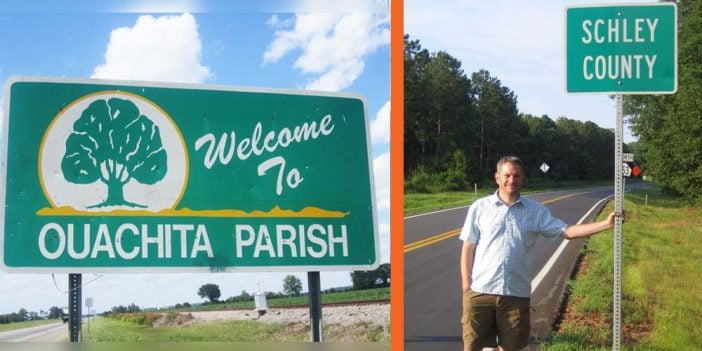 If you can pronounce “Loachapoka” on the first try, then we owe you a “draught” (pronounced “draft” and rhymes with “laughed”) of beer. But seriously, if you’ve got issues pronouncing the name of this tiny town in Lee County, we’ll assume it’s because you aren’t from there—seeing as it has a population of fewer than 200 people at last count.Loachapoka is pronounced LOW-cha-POH-Kah, but you’ll never forget it if you listen to this little ditty. Speaking of little ditties, check out the theme song for Alabama’s National Fair.

This tiny unincorporated municipality extends for three miles along the southeast coast of Nunivak Island, Alaska, which is part of the Bethel census area of the State of Alaska. The name has been referred to as “unpronounceable and unexplained,” and no hint as to its proper pronunciation is offered even in Donald Orth’s Dictionary of Alaska Place Names, which is the leading text on Alaska Place Names. Hey, at least it’s not Unalaska, Alaska, which although easy to pronounce, wouldn’t exactly roll off the tongue if you happened to be from there and were trying to explain your background (“Hello, my name is John, and I’m Unalaskan.”)

Here’s a prime example of the problem Americans face when they find it challenging to pronounce the names of cities and towns that have origins in other languages. From the looks of it, Sonoita, Arizona would appear to originate from the Spanish language (which in fact, is true), which might lead you to pronounce it as So-no-EE-ta].Nope. The locals pronounce Suh-NOY-ta.

Ouachita, Arkansas, refers to a lake, river, mountain range, and a county in the State of Arkansas (which is pronounced ARE-kan-saw, in case you were tempted to pronounce it like “Kansas”). OK, so it’s not a municipality exactly, but it’s known as the most mispronounced place-name in Arkansas. The correct pronunciation is WASH-ee-tah, which will come in handy if you’re planning a trip to the Hot Springs in Ouachita County, Arkansas.

The unincorporated municipality of  Zzyzx is in San Bernardino County, California. It’s pronounced ZY (rhymes with EYE) – Zicks. Before 1944, Zzyzx was known as Soda Springs. Then along came this guy: Curtis Howe Springer, a self-proclaimed doctor and preacher, who founded the Zyzzx Mineral Springs Resort (he wanted it to be the very last word in the English language). Although Springer is known by the American Medical Association as the “King of Quacks,” his name for the place stuck.

Let’s just get this straight: it’s Crested BEWT, not Crested But. There are simply no “buts” (or butts) about it. Did you know that Colorado is one of the happiest states in the U.S.?

If you’re thinking it’s pronounced like the city in Germany, you’re wrong. It’s actually BURR-lin, emphasis on the BURR. Located at the geographic center of the state, the land was originally known as Pagonchawnischage (a Mattabassat Indian name), so really, things could be a lot worse.Did you know in Connecticut, it’s illegal to sell pickles that don’t bounce?

Most people are familiar with the city of Newark, New Jersey, which is pronounced NEW-irkwith a slight emphasis on the first syllable (locals often end up turning the two syllables into one: Nirk). But not in Delaware. In Delaware, it’s pronounced New-ARK.

Formerly known as “Pea Ridge,” this city changed its name to Buena Vista in honor of Zachary Taylor’s victory in the Mexican-American War. So, then what’s it doing on this list? After all, the name is clearly referencing the Spanish language. You probably can even translate it (“good view”). The problem is, not in Georgia. In Georgia, it’s BEW-na VISS-tuh.Did you know that after the war, Taylor became the 12th United States President? Here are some other fascinating facts about America.

Page Page 1 of 5
Previous article: Riddle: What Did You Eat?
Next Post: Iconic ‘Doublemint Twins’ Reveal ‘Debilitating’ Darkness That Nearly Tore Them Apart