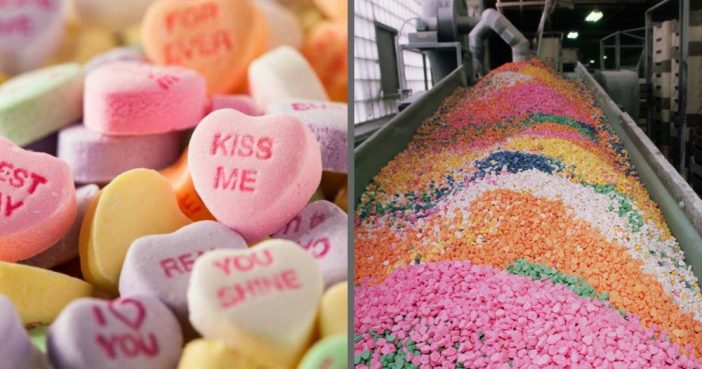 If you’ve been in a drug store or supermarket lately, you’ve probably noticed the shelves are stocked with Necco Sweethearts in preparation for Valentine’s Day.

The conversation hearts are virtually synonymous with February 14, but here are some facts you might not know about them:

Before World War I, Sweethearts candies came in a variety of shapes, including baseballs, horseshoes, and watches.

The Sweetheart’s predecessor was a candy scallop shell that held paper messages inside, similar to a fortune cookie.

The original hearts included wedding-day editions with sayings like, “Married in satin, Love will not be lasting,” “Married in pink, He will take to drink,” and “Married in white, You have chosen right.”

There are about 45 sayings included in the mix but sometimes even those aren’t enough to get one’s message across. In 2004, Michigan resident Mike Waltz planned to propose using “Marry Me” hearts but found only a few among several bags he’d purchased.

He reached out to Necco for help and the company obliged by sending him a boxful. (His now-wife, Chris, says she’ll never open it: “It’s a keepsake.”) Today the company offers candy customization for special occasions.

To make enough Sweethearts for Valentine’s Day, production for the next year starts right after the holiday, in late February, and continues until mid-January.

Page Page 1 of 2
Previous article: What Items Do People In Your State Love Buying The Most From Walmart?
Next Post: Kirk Douglas Holds His Newborn Great-Granddaughter And It’s Beyond Precious!