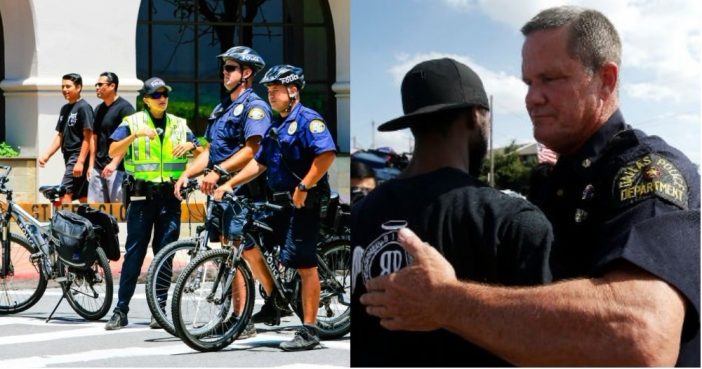 We spoke with police officers from around the country to hear what it’s like to walk (or drive) a beat right now. Their answers offer a glimpse into the great highs and debilitating lows they experience as they try—and usually succeed—to serve our communities. At the same time, they, like the nation at large, are preoccupied with both the causes of and the fallout from the high-profile shootings of unarmed African Americans that have drawn so much attention to what they do and how they do it. Listen in.

The news can be misleading

If you get information about policing only from watching the news, the impression you are left with is that all police-civilian interactions are going badly. That’s not the case. —Sue Rahr, a former sheriff, now executive director of the Washington State Criminal Justice Training Commission.

Officers tell me people are stopping them daily, thanking them, buying them lunch or a cup of coffee. Reasonable people know that police are under extreme scrutiny right now. They’re coming up and thanking us for the job we do. —Lt. Bob Kroll, president of the Police Officers Federation of Minneapolis

The world has made us cynical

The best part of the job? Waving to a kid and getting a wave in return and not a middle finger. We were much more idealistic 15, 20 years ago. We were going to change the world. Unfortunately, the world changed us. We’re more cynical, more guarded, less trusting. —Chicago police officers who blog anonymously at secondcitycop.blogspot.com

We know people are afraid, and that bothers us

I pulled over a female the other day, and it took her a block or two to stop. When she finally did, I asked why, and she said she didn’t want to stop where there wasn’t any light, because she didn’t know what I was going to do to her. I thought, Wow, we’re the bad guys now. —Jay Stalien, a police officer in Florida who also served in Baltimore

We get a shocking number of threats

We live in a society that has become more hostile toward the government and its officials. We receive many more threats than we used to. —An Iowa state trooper

Race impacts how people see us

As an African American myself, I’m viewed as some kind of traitor. —Jay Stalien

We get nervous, too

That anxiety you feel when you encounter us? We feel it too. —Nakia Jones, a police officer in Warrensville Heights, Ohio (Beat any speeding ticket with these magic words.)

Weapons have become a major concern

Before, when we stopped a car, we just walked up, said “You’re speeding,” and asked for license and registration. Now the first thing we ask is if they have a weapon in the vehicle. —An Iowa state trooper

With all the scrutiny and the anti-police climate right now, it’s becoming a challenge to recruit good and qualified people. There has been a big drop in interest. —Lt. Bob Kroll

We act out of self-defense

People seem to think that we should take the time to discern whether a gun is real, whether a person is willing to use it, and if they will shoot. We can’t wait for a person to shoot first. That could mean not going home at the end of your shift. —An Iowa state trooper

Page Page 1 of 5
Previous article: Student Designed US Flag & Received a B- For It
Next Post: DISNEY DON’TS: The 3 Words Disney Employees Aren’t Allowed To Say