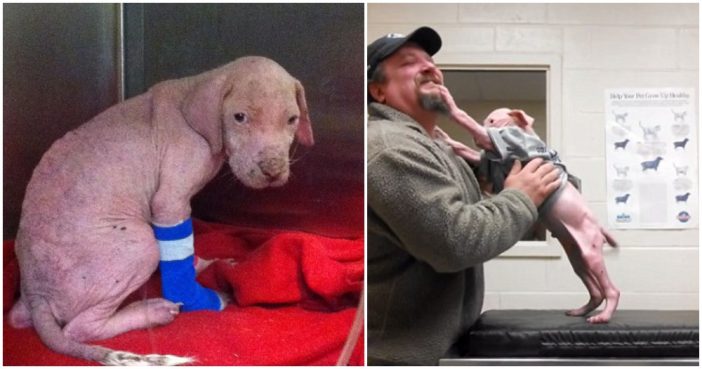 If someone saved your life, you’d remember them, right? But could the same be said for a young puppy? This little dog’s rescuer was about to find out. As he opened the door, he hoped for some form of recognition… and what happened next was beautiful.

In 2013 a story came out of Nova Scotia, Canada, concerning a poor puppy called Mojo. The American Staffordshire terrier/pit bull crossbreed had been destined for a sinister and violent future. To be specific, he was to be used as a bait dog.

The life of a bait dog is nothing but a constant fight for survival. Indeed, the creatures are usually pitted against some kind of chained wild animal in the name of entertainment. And not only is the practice extremely abusive, but it is also illegal in both the U.S. and Canada.

That was assuming, however, that Mojo even made it to adulthood. After all, the degree of neglect he had suffered was so extreme that it was unlikely he would have lived that long. The puppy had, in fact, already contracted a health condition that had gone untreated and nearly claimed his life.

More precisely, Mojo had developed a skin problem called Demodicosis, or demodectic mange. The illness is caused by mites, and although most dogs have them, they seldom cause serious problems. In rare cases, however, they can cause a severe reaction in their host.

Especially if their host happens to be a young puppy with a low immune system like Mojo. His condition became so bad that he lost all of his hair, and his exposed skin was covered in sores. Mojo’s rescuer later told The Dodo that the dog’s “whole body was a complete scab.”

The mange was so bad, in fact, that it very nearly ended Mojo’s life. Fortunately, around that time, he was rescued by a kindly soul by the name of Joey Wagner. As it would happen, Wagner had some experience in caring for animals.

Indeed, Wagner helped found Nova Scotia’s Baie Ste. Marie Animal Society (BSMAS), a non-profit animal rescue group. As a result, he was in a position to help Mojo, and the puppy came under the protection of BSMAS. Wagner had reached Mojo just in time.

However, at that point, Mojo’s life expectancy could be measured in mere hours. In addition to his potentially lethal case of mange, the puppy was also in drastic need of food and water. Indeed, Mojo’s health was so bad that he was taken to a clinic for emergency care.

“The look [Mojo] gave me, I knew that he wanted to live,” Wagner told CBC News in February 2013. “So, we did everything we could.” The pup was taken to the Atlantic Veterinary College, under the care of Doctor Tracy Matthews. And Mojo refused to give up.

“He’s been doing really well,” Matthews said after Mojo had received a week of treatment. “It’s just like in human medicine. A lot of it comes down to the will of the patient to get better and he certainly has that in spades.”