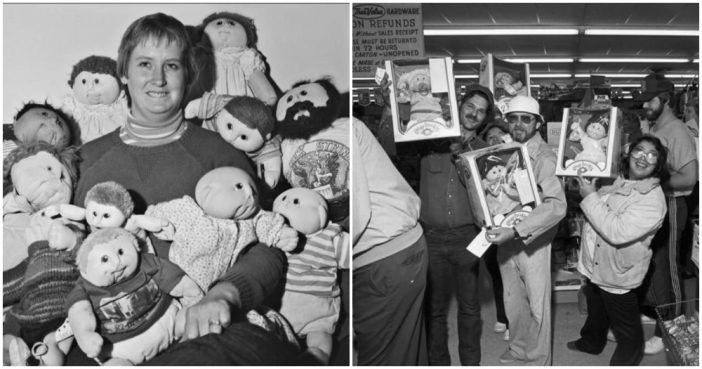 Remember Cabbage Patch Kids? During the ’80s, it seemed that everyone had one of those pudgy, pillowy, round-faced, dimpled dolls. The other day I found myself reminiscing with some friends about the phenomenon.

One friend said her trusty old grandpa had gone to the toy store at 5 a.m. to wait in line for a doll for her. A couple of other friends said they got theirs on the “black market,” telling tales of whispered phone calls and secret basement gatherings. A few said that their grandma or mom had made a doll for them by hand.

Names were shared, like “Daisy Eloisa,” “Gilchrist Patty,” “Avril Astra,” “Willy Cyril,” and my favorite: “Olivera Olive.” Everyone remembered how the name “Xavier Roberts,” the creator of the dolls, was tattooed on each doll’s bottom (kinda creepy if you think about it).

The height of Cabbage Patch Kids insanity was during the holiday season of 1983. Stores were mobbed; people trampling and fighting each other to get their hands on the coveted dolls. The problem was that the product was relatively new and suddenly through-the-roof popular, and there simply weren’t enough dolls to meet the insatiable needs of consumers.

Most of my friends’ parents weren’t bold enough to weather the crowds and the pandemonium. But some friends remembered being in a store during the height of the craze and getting run over by zealous shoppers who were fighting to get their hands on one of those yellow boxes with the shiny cellophane wrapping.

Part of what made the dolls so appealing was that each doll was one-of-a-kind. You adopted the dolls, the folklore is that they were born in a Cabbage Patch and in need of a home. Each doll came with adoption papers, a birth certificate, and an “oath” that you were supposed to recite aloud while raising your right hand. Do you remember it? I do:

A friend told me about getting a doll named “Reagan Corissa.” She didn’t like the name and wanted to change it to “Victoria Ann.” But she had to do it officially, which meant mailing in the paperwork. Everything about the dolls was adorably official, drenched in mythology, and did a perfect job of tugging at the heartstrings of hordes of us girls who were already planning our careers as mothers.

Certainly not all girls—or boys—were taken by the whole adoption/motherhood aspect of it, but I was. The Cabbage Patch craze drew me in big time. My problem was that I had to wait a seemingly endless number of months to get one. My mom was a newly single mom at the end of 1983, and my baby sister had just been born, so she was also newly mom of two. The dolls sold for $30 to 40 dollars a pop, which was a lot of a toy in the ’80s. Money was incredibly tight for my mom, but I wouldn’t let up with my begging and pleading.

It was sometime in 1984 that I got one, and by that time, it seemed like everyone I knew already had one. Her name was Rowena Adora. She had short, curly blonde hair and blue-green eyes. The funny thing about her is that I remember wanting her—pining for her—more than I remember actually playing with her. I know that she stuck around for quite a few years, finding a permanent place in my stuffed animal/doll line-up on my bed. But aside from that, I don’t remember playing with her more than any of my other toys.

Still, whenever I see a Cabbage Patch Kids doll, I get that giddy-kid feeling along with a rush of nostalgia. The dolls are just so darn likable, and even now I can still see the appeal; there is something very comforting and magnetizing about them.

How did you get your Cabbage Patch Kid? What was its name? Do you still have it? What’s your story?

Previous article: 25 Ways To Use Leftover Pickle Juice That You’ve Never Thought Of Before
Next Post: 20 Vintage Photos, About Women, That Can’t Be Explained