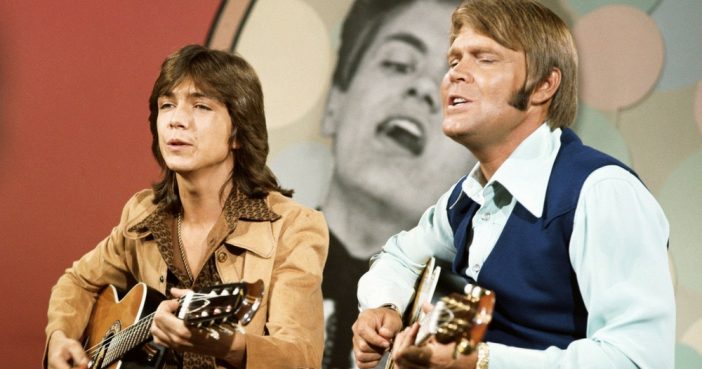 By early 1969, singer-guitarist Glen Campbell had conquered the worlds of both country and pop music, topping the album charts with his Wichita Lineman LP. He would also soon make his big-screen acting debut alongside film legend John Wayne in True Grit. But throughout the year, Campbell’s greatest visibility was via his weekly CBS television series The Glen Campbell Goodtime Hour, which showcased not only his warm, folksy manner and numerous hit songs but also his considerable guitar-playing skills.

Campbell’s guests on the series, which climbed into the Top 20 in the Nielsen ratings, naturally included such country stars as Merle Haggard, Roger Miller, Waylon Jennings and Johnny Cash (soon to get his own show on rival network ABC), as well as other fellow musicians, comedians and TV stars. Running a total of four seasons, with writers that included Rob Reiner and Steve Martin, the Goodtime Hour began to slip in the ratings in its last two years on the air, but Campbell himself remained popular and the show continued to draw major celebrities.

In October 1971, one of the biggest stars on television was 20-year-old David Cassidy, whose role as Keith Partridge on ABC’s The Partridge Family had turned him into a teen idol practically overnight a year earlier. Cassidy and his co-stars, especially Partridge matriarch Shirley, played by Cassidy’s real-life stepmother Shirley Jones, made the rounds on other talk and variety series as their show vaulted into the Top 20 and their records, especially the chart-topping “I Think I Love You,” dominated the airwaves for the next two years. On October 5th, Campbell’s show welcomed Cassidy and his onscreen sister Susan Dey for an episode that paid tribute to the movies. Jones, an Academy Award-winning actress, was also featured. Three weeks later, Cassidy was back a musical guest, performing several Partridge Family tunes.

Cassidy, who died November 21st, just three months after Campbell’s passing in early August, often acknowledged the complicated relationship he had with those hit songs, which were considered the height of bubblegum pop at the time. His own musical tastes were far more eclectic and rock-oriented, but in the above clip, a highlight from his second Goodtime Hour appearance, Cassidy joins the host for a harmony-rich medley of the Everly Brothers favorites “All I Have to Do Is Dream,” “Bird Dog,” Wake Up Little Susie” and “Bye Bye Love.” Although Campbell does the heavy lifting on guitar and lead vocals, Cassidy branches out from his Partridge role with great relish, even giving the classic tunes just the right amount of country twang. That’s about as close as any of the Partridge clan got to country cred, other than the very first episode of The Partridge Family in September 1970, when the fictional group was introduced on a Las Vegas stage by the very real Johnny Cash.

The Goodtime Hour would last just five more months, wrapping in March 1972, with several episodes available from Shout Factory TV. The Partridge Family would take their last bus ride in the spring of 1974, although the show continues to air daily on Antenna TV. Campbell and Cassidy both continued to record and perform for the next several decades. While 2017 has sadly taken them both, the good times captured in early clips such as this are certainly worth remembering.

Previous article: 15 Wintry Words For Snowy Weather Across the United States
Next Post: When We Tell You that He Looked Very Different as a Young Man, We Mean it. Guess Who?