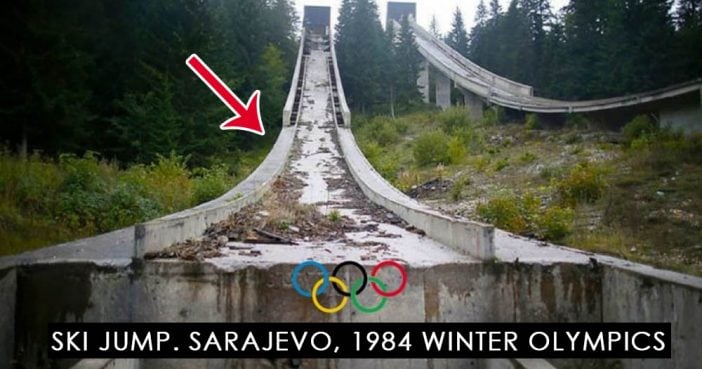 Most cities simply do not have the infrastructure required to withstand the two-week influx of athletes, coaches, fans, and media members. The money required to build state-of-the-art athletic facilities is skyrocketing, and academic research suggests spending billions on a two-week event is not a wise investment.

In the worst-case scenario for host cities, Olympic venues go unused after the games and become white elephants – total wastes of space and money. We’ve seen this at a number of different Olympic sites around the world. Of course, the reasons this happens are specific to each country: Sarajevo, for example, suffered from a gruesome war that caused the 1984 Winter Olympic venues to crumble. Nevertheless, these photos from Reuters, Getty Images, and others have become symbolic of the downside of hosting the Olympics.

Sarajevo hosted the Winter Olympics in 1984.

One decade later, civil war broke out and ravaged the country.

Some of the Olympic venues were repurposed and used as military facilities.

The bobsled facility was turned into an artillery stronghold during the war.

A dog walks past the Kosovo Stadium, where the opening ceremonies were held.

And weeds grow over the walls of the Kosovo Stadium.

Seating is overrun with grass and weeds.

Another angle of the ski jump.

The track itself is covered in debris.

Page Page 1 of 7
Previous article: 22 Of The Most Memorable And Iconic Moments In Olympic History
Next Post: Couple Buys Ginger Rogers’ Childhood Home Call Experts When Her ‘Ghost’ Visits