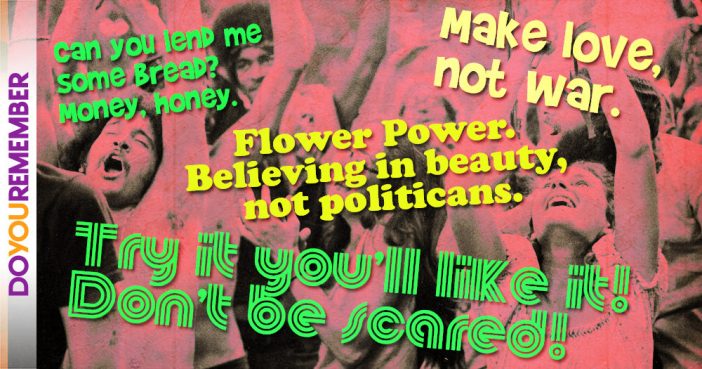 The 1960s was a decade of upheaval. The civil rights and women’s movement were going strong, protestors demonstrated against war, and () rampant. All of this societal tension gave birth to words and phrases lifted from new sources: African-American slang, personal experimentation, advertisements and confrontational politics. There are too many words and phrases to list in one place, so we chose a few of our favorites to lay on you, man.

He went ape! When one loses control.

Keep on truckin. Don’t give up; also, Keep on keeping on.

Can you lend me some bread? Money, honey.

I had a bum trip. A bad LSD experience. Also, What a bummer.

I got burned. I was cheated, maybe on a dope deal.

Do your own thing. Be an independent spirit.

Ban the bomb. Do away with nuclear weapons.

Don’t trust anyone over 30. You can’t believe the man.

I love the Fab Four. The Beatles are fabulous.

Today is the first day of the rest of your life. Make conscious decisions going forward.

Don’t freak out, man. Originally, a reaction to a bad LSD trip. Later on, an aggressive reaction

The Generation Gap. The big differences between us and our parents.

Gimme some skin. Let’s shake on it; high-five.

Let it all hang out. Express yourself; don’t be inhibited.

Anything a-go-go. Adding a discotheque flavor.

What a long, strange trip it’s been. From Grateful Dead’s Truckin; life gets mighty odd at times.

Is it true blondes have more fun? and Does she or doesn’t she? Only her hairdresser knows. Hair color ads.

Cool your chops. Put a lid on it. Shut up. Also, Cool your jets.

Danger, Will Robinson.Robot’s warning on Lost in Space.

Up against the wall, muthaf**ker! Police order lifted by the counter-culture.

Turn on, tune in and drop out. LSD-advocate Timothy Leary’s advice to the young.

Can I crash at your pad? Sleep over at someone’s home.

Don’t Bogart that joint. Don’t be selfish; pass it around.

Plop plop. Fizz fizz. Oh what a relief it is. Alka-Seltzer to the rescue.

It was really groovy. Very positive, as in the groove.

The In-Crowd. Hip people in the know.

Meanwhile, back at the ranch. A storyteller returns to his main point after diverging.

Was he a Mod or a Rocker? Two style camps from 1960s London.

She’s my old lady (or He’s my old man). My girlfriend/wife, boyfriend/husband.

Let’ pack it in. Call it quits.

The pigs beat me up. The police; also the man.

Power to the people! Right on Political mantra, affirmed with a raised fist.

Riding shotgun. A car’s front-seat on the passenger side.

Sock it to me! Give me what you’ve got.

He spaced-out. He was lost in reverie.

I’m straight.I’m not high on drugs.

TCB. Taking care of business. Seeing to what needs to be done.

If this vans a-rockin, then don’t come a-knockin. Sign on hippie vans, warning that some sweet, sweet love-making is going on inside.

It was psychedelic. Suggestive of a mind-altering drug trip.