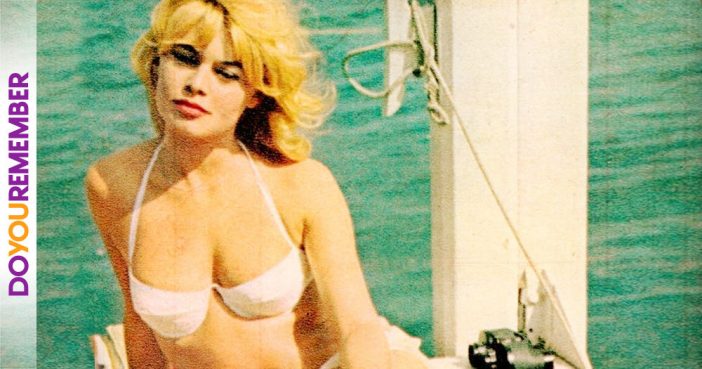 On July 5th, 1946, the world was given a great gift from French designer Louis Reard: the bikini. Reard named his controversial design after Bikini Atoll in the Pacific, where the U.S. had tested the atomic bomb just three days earlier. Reard hoped that his new bathing suit would be as explosive as the American tests.

While Reard was certainly a pioneering genius, his bikini was not the first two-piece swimsuit. During World War II, war rationing demanded that designers use less fabric, resulting in the first two-pieces. Though they bared more flesh than had been seen on beaches past, they kept women’s navels covered. The loss of only a few inches of fabric in Reard’s new bathing suit was met with much resistance. When he debuted his belly-button-baring suit, no model in Paris would wear it. Reard was forced to have Micheline Bernardini, a nude dancer, model his suit.

Reard had wanted an explosive reaction to his bikini, but he may not have been prepared for how incendiary it really was. Scandalized countries like Belgium, Italy, Spain and Australia banned the swimsuit, as did numerous international beauty pageants. Even the Vatican took a stand, declaring the bikini sinful. Still, its popularity spread quickly throughout France, partially because of Brigitte Bardots endorsement of the skimpy suit. She was photographed wearing it at the beach numerous times, and even donned one in her 1952 film The Girl in the Bikini.

Despite Bardot’s popularity, the bikini remained taboo in America. It was banned in many states, and American film stars continued to wear high-waisted swimsuits throughout the 1950s. The true, low-cut bikini didn’t catch on in America until the 1960s, when Swiss actress Ursula Andress emerged from the ocean wearing a now-iconic belted beige bikini in Dr. No, the first Bond film. Following the success of Dr. No and the popularity of Andress bikini, American actresses began to wear navel-baring swimsuits with increasing frequency. Sports Illustrated magazine issued its first Swimsuit issue in 1964, and Raquel Welch became famous for her animal-skin bikini in the publicity photos for the 1966 movie One Million Years B.C.. The increasing visibility of California surfing culture, popularized by movies like Beach Party and bands like the Beach Boys, contributed to the rising ubiquity of the bikini on beaches throughout America.

During the 1970s, bikinis became even more scandalous, as string bikinis, featuring low-rise bottoms and narrower, tied sides, became en vogue. It was in the 1980s, though, that the bikini world was really shaken up. Inspired by risque Brazilian styles, American bikinis became more revealing than ever. Thong bikinis, which exposed the backside almost entirely, became popular. At the same time, leg openings were moved up to rest very high on the hips. The total effect ensured that there was as much of a view of women’s hips and butts as possible.

Contrary to every other trend in bikini history, the 1990s and 2000s saw the bikini begin to cover more skin. In 1994, the bikini became the official uniform of women’s Olympic beach volleyball, and the rise of the athletic bikini ensued. Recently, retro silhouettes have come to the fore high-waisted bikinis are fashionably vintage and cover any bits that women may not want to flaunt. Of course, the skimpy bikini be it string, thong, or even topless has and will always be around. Bikini fashions may change in the coming years, but the standard bikini is here to stay.

1946 French Actress Barbara Laage, in a swimsuit cut from one yard of cloth 6 years before the "birth" of the bikini pic.twitter.com/GQsB2ofv5G

Previous article: DYR Today, July 5
Next Post: Dream a Little Dream of Me