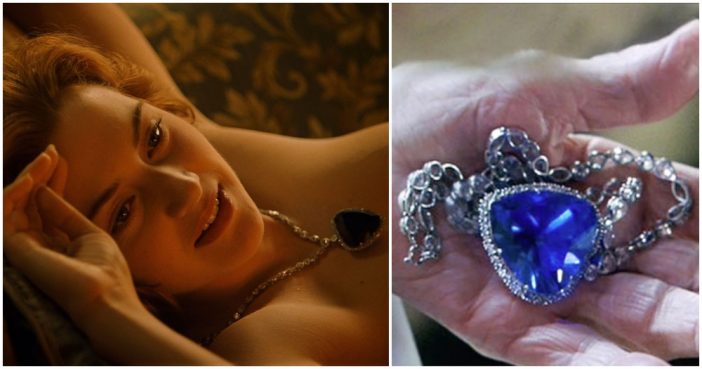 But the Heart of the Ocean — and J. Peterman — will go on.

It’s been 20 years since we first watched Caledon Hockley fasten the Heart of the Ocean diamond around Rose DeWitt-Bukater’s neck, and just as many since we gasped in collective disbelief as an elderly Rose tossed the pendant overboard. But judging by the sheer volume of replicas of the fictional priceless jewel still shoppable online — everyone from Zales to Walmart sells a version — the gobstopper-sized diamond hasn’t lost its luster yet.

While those in search of a Heart of the Ocean to call their own might have thousands of available options, however, there’s only one brand whose recreations are officially sanctioned by 20th Century Fox, the studio that made Titanic: The J. Peterman Company, founded in 1987 by entrepreneur John Peterman. Peterman launched his brand with the goal of offering “uncommonly good stuff” inspired by his international travels, and it’s best known for its authentic reproductions of vintage clothing, accessories, and home décor — all sold via the brand’s famous, fancifully written catalog.

Thirty years later, his catalog is still in circulation, each item still accompanied by a bit of whimsical prose. The caption for a brocade holiday dress ($248) featured in J. Peterman’s Christmas 2017 issue, for instance, reads as follows: “Mischievous fun ensues when the eggnog is spiked. Giggles commence. Butterflies swirl. Conversations glide past pleasantries and into the good stuff. Everyone starts misbehaving a bit. This is all well and good. However, there are other ways to send a jolt through the holiday crowd. Like wearing this dress.”

At its mid-1990s peak, the J. Peterman Company was pulling in $75 million in annual sales. A big PR boost came from Seinfeld, which parodied the company for several years; in an almost too-good-to-be-true turn of events, John O’Hurley, the actor who portrayed the eccentric “J. Peterman” on the series, is a personal friend of the real John Peterman and an investor in the company. But Titanic likely played an even larger role in the company’s success, thanks to J. Peterman’s decision to sell authentic props from the film along with precise replicas of others — including the Heart of the Ocean.

But how did Peterman get his hands on such a valuable piece in the first place? “I remember it like it was yesterday,” he tells me by phone. “Someone in the company said, ‘I know this movie, Titanic, is coming up. It’s a period movie, and the same kind of stuff we always do. We should have a deal with them!” Peterman’s team reached out to 20th Century Fox a few months before the film was set to hit theaters in December 1997 and struck a deal: They’d buy some of the actual props featured in Titanic, in addition to licensing the whole lot for commercial reproduction. “This was the first time that had ever been done,” Peterman says of the deal, “and we ruined it for everyone else — because suddenly, [the studio] realized those props had value.”

Entering 20th Century Fox’s warehouse, he remembers, was like “walking into a goldmine.” Highlights from his haul included the pink chiffon gown Rose (Kate Winslet) wears as the ship sinks and the wool vest, suspenders, and corduroy pants outfit seen on Jack (Leonardo DiCaprio) for most of the film; Peterman later sold the original costumes for $11,500 and $9,000, respectively. He had other pieces replicated in larger quantities, including the beaded evening gown Rose wears to the steerage party (which sold for $2,000) and the purple hat she wears while first boarding the Titanic ($350).

And if those seem like relative steals for a piece of cinema history, consider this: The Heart of the Ocean, according to Peterman, cost him “way, way under $1,000.” After acquiring one of the two prop necklaces featured in the film’s shoot, he tapped a costume jeweler (“It may have even been the same people who made the prop for the movie,” he remembers) to create identical dupes made from the same faux stones. For $198, you could buy your very own Heart of the Ocean, complete with a certificate of authenticity from 20th Century Fox. “I didn’t think we’d sell any of them,” he laughs. “Boy, was I wrong!”

Some criticized the company’s decision to capitalize on a historical tragedy, prompting Peterman to address the controversy in a 1999 essay for the Harvard Business Review. “The products were authentic movie props; we never led people to believe that the materials came off the ship, nor did we want them to think so,” he writes. In the same story, however, he regrets reproducing the Heart of the Ocean. “The product did well, but selling it was a clear commercial decision,” he explains. “We shouldn’t have. It was not authentic, it was tied too completely to the movie, and it appealed to an audience younger than our target 35-to-55-year-olds. It was a costly success in terms of our brand’s integrity.”

To say it “did well” might be an understatement. Titanic became a monster hit, of course, and the company wound up selling $1 million worth of Heart of the Ocean replicas. Peterman says he typically produces items in limited quantities but made an exception for the necklace, ordering thousands to be made in an attempt to keep up with demand.

Spurred on by the lightning-strike success of its Titanic collection, the J. Peterman Company quickly ramped up its expansion plans. After securing venture capital, according to Time, it opened 10 new brick-and-mortar stores in 1998 alone, anticipating an IPO in 2002. It couldn’t sustain the growth, however, and went into Chapter 11 in 1999, sinking into bankruptcy almost as swiftly as the RMS Titanic slipped beneath the ocean’s waves. This story, however, has a happy ending of sorts: Paul Harris Stores purchased the company that same year, but when it went bankrupt itself in 2000, Peterman managed to raise enough money to buy back his namesake brand.

While you can still subscribe to the since-relaunched J. Peterman Company catalog (for free!), don’t expect to find its reproduction of Rose’s sparkling pendant — widely considered by Titanic buffs to be the gold (make that diamond) standard when it comes to Heart of the Ocean replicas — in its pages or on its e-commerce site. For that, you’ll have to head to eBay, where bidding for one of J. Peterman’s pendants typically starts at $400 and often exceeds four figures.

As for the original Heart of the Ocean prop Peterman purchased back in 1997? “That went in the bankruptcy,” he says; he has no idea who owns it today. One thing’s for sure, though: It’s definitely not at the bottom of the Atlantic.

Previous article: 15 Of The Most Outrageous Medical Treatments In History
Next Post: 15 Trivia Facts About ‘Taxi Driver’ You Probably Didn’t Know