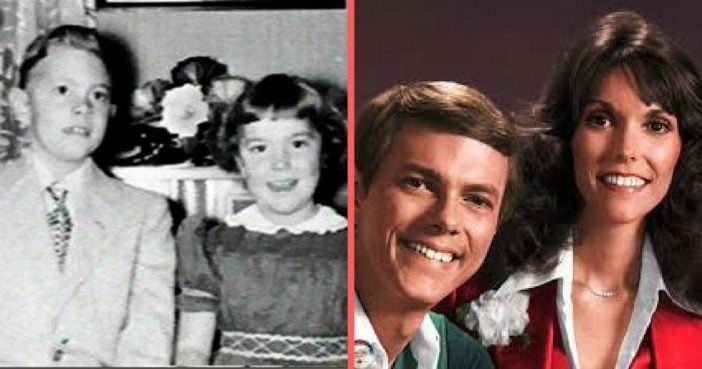 When reminiscing about my past Christmas holiday’s, listening to the Carpenters Christmas music is always an important part of bringing back those memorable younger years.

For the  “Generation Z”  folks, The Carpenters were a famous pop, easy-listening American rock,  brother- and- sister instrumental and vocal duo from 1970 and the early 1980s. The group had three No.1 singles on the Billboard Hot 100 chart with several other single records which placed in the Top 10. Additionally, they had fifteen No. 1 hits on the Adult Contemporary Billboard chart during those years.

If you’ve heard about The Carpenters, then you have undoubtedly heard about how Karen died tragically in 1983 of heart failure at the age of 32. Thought by many to be caused by the eating disorder “anorexia nervosa.” With such an abundance of grim stories about her battle with this disorder, here is a list of ten intriguing facts about the Carpenters you may not have heard about before.

1. The Carpenters refrained from discussing their monetary worth, but they did state they were both millionaires.

2. When the Carpenters would play their hit song “Sing” at concerts, they would recruit a local children’s choir from the town they were playing in.

3. Even to this day, the Carpenters music is still selling as much as any major recording artist/artists in the music industry today.

The duo’s brand of easy-listening pop produced a record-breaking run of hits in the U.S., U.K. and Japan’s Asian market, with only Mariah Carey and The Beatles ranking higher.

4. Before creating the group “The Carpenters” Richard Carpenter performed at Disneyland, Ca, with John Bettis, as a banjo and piano duo at the Coke Corner on Main Street during the summer of 1967.

However, it didn’t work out because they played to their audiences requests, not their approved song list, and were fired. (Oh, woe to Mr. Guder aka “The Boss”)

5. The Carpenters were often involved with raising money for charity events.

They had their own softball team and July 1973 the Carpenter team helped raise funds for the Middlesex County Cancer Society. Karen was the star pitcher of the game- which was played opposite a celebrity team from New York and New Jersey.

6. The Carpenters famous, but modest Newville house, located in Downey, California is pictured in the background on the cover of their 1973 (5th) album “Now & Then.”

Fans rallied in 2008 to prevent the current owners from the demolition of the home-which is considered the “Graceland” of Carpenter fans. Karen Carpenter died in the home on Feb 4th,1983, which at the time was the home of her parents. (They must have won….it’s still standing today.)

7. It’s a rumor that the ghost of Karen Carpenter has been seen at the Jim Henson Company entertainment complex.

Staff members have reported seeing a woman in the dressing room area of the soundstage…..the description of her appearance and dress indicates it could be the ghost of Karen Carpenter- whose office used to be located upstairs over the stage when the lot was once  A&M Records. People say they see her in the dressing rooms, but they never see her exit the room.(A&M Records was an  American independent record label founded by Herb Alpert and Jerry Moss, and the Carpenter’s record label for several years.)

8. On October 12, 1983, just months after her death, the Carpenters received a star on the Hollywood of Fame.

Additionally, in 1996-13 years after her death- Karen Carpenter’s solo album was finally released to the public.

In the 1970s, Karen Carpenter was considered-‘The Queen of Christmas.’

For me and millions of her fans, her voice and her TV Christmas specials will always be the highlights of the Christmas Season. Listen here: