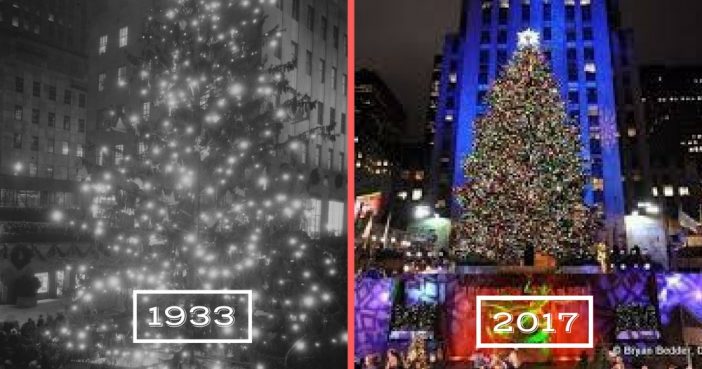 You’ve probably endured a televised tree lighting ceremony or two over the years, and you may have even braved the tourist-ridden plaza to see the massive evergreen for yourself. But there’s a lot more to the Rockefeller Center Christmas Tree than meets a jaded New Yorker’s eye. And by “a lot more” we mean “these 18 things”…

1. In 1931, the first tree was put up unofficially as something of a Depression-era fairy tale

A group of workers responsible for the early construction phases of Rockefeller Center raised the tree to celebrate the fact that, unlike most of America, they actually had a way to pay the bills. They decorated the 20ft balsam fir with cranberries, paper garlands, and a few tin cans. A clerk distributed their paychecks from the foot of the tree later that night.

A publicist organized the first tree-lighting ceremony. A 50ft pine decorated with 700 lights stood in front of the RCA Building, then eight months old.

3. The tree is super patriotic

In 1942 three small trees — each decorated in one of the flag’s colors — were presented in support of the country’s efforts in World War II. In 1944, because of wartime regulations, the tree went unlit. And in 2001, the tree was decorated in red, white, and blue as the US was still reeling from the 9/11 attacks.

4. The tree lighting ceremony was first televised in 1951

It made its debut on The Kate Smith Show hosted by the “first lady of radio” before moving to the iconic children’s program Howdy Doody. Now broadcast on NBC, the ceremony has featured the likes of Bob Hope, Barbara Walters, Liza Minnelli, Sheryl Crow, Bette Midler, Billy Crystal, and Mariah Carey.

That’s a lot of damn facets, it’s also got 720 LED bulbs, 44 circuit boards, and 3,000ft of wire, and it weighs 550lbs. Rock Center won’t disclose its cost, so it’s got to be pricey (estimates value the stunner at $1.5 million, which actually makes it LESS expensive than the clock on top of the info booth in Grand Central). Unveiled by Fergie, which is kinda weird, in 2004, it’s the largest of a series of stars to have topped the tree.

6. The tree is solar powered

LED lights were introduced in 2007 and are powered by 300 solar panels installed on the roof of One Rockefeller Center. The tree now saves enough energy to power a 2,000sqft single-family home for a month. That’s 2,213 kWh per day (but you knew that).