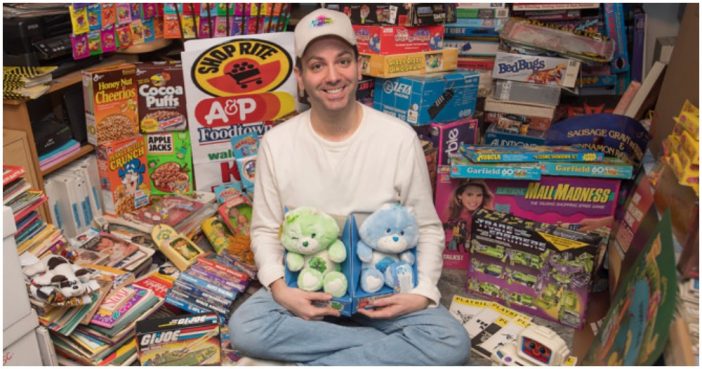 This Bronx guy is like, totally living in a material world.

John-Paul Annunziato thinks the ’80s are so rad, he’s shelled out more than $100,000 so far to build a totally tubular collection of 30,000-plus items that define the decade of shoulder pads, Valley girls, and “ALF.”

“My goal initially was to bring back the 80s — the culture and the style,” he said. “There was no political correctness. No censorship. The clothes, everything was a statement piece… The 80s was a wild time.”

The 39-year-old’s one-bedroom Morris Park apartment is a veritable museum to the big hair era, and his stuff has kicked him out of his own bedroom — where board games such as Operation stand in columns that touch the ceiling, Care Bears wait to be taken out of their boxes — still with the $19.99 JCPenney price tag — and 300 video game cartridges vie for precious space.

There are dozens of old cereal boxes, cans of Aqua Net hairspray, a bin stuffed with Hanna-Barbera Snorks toys; electric Coronet shears still in the packaging; Playboys ( he likes the articles); and early Swatch watches in electric neon colors. The most he’s paid for a single item? Four hundred bucks for a mint in the box Masters of the Universe Castle Grayskull playset.

The former nursing home director said his extreme collecting began as therapy when he lost both of his parents in 2009.

And it became an obsession when Annunziato was in two car accidents in 2014, leaving him barely mobile for about two years.

But he could still scroll through eBay — and his collecting went into hyperspace, jumping from about 5,000 items to more than 30,000.

He shows the world his treasures on social media and on his new website, 80s Then 80s Now, which launched last month and is now his full-time job, the Bronx Times reported.

“This needs to have some sort of showcase,” he said. “This needs an audience.”

“I can not imagine anyone not finding themselves looking at this website without wanting more,” Ariadnie Sourlis wrote on Facebook.

Previous article: Henry Fonda Was Married Five Times But Rarely Talked About His Ex-Wives
Next Post: Find the Letter “T”