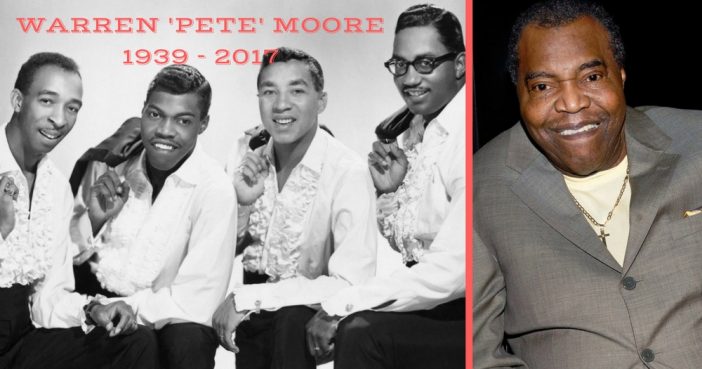 Warren “Pete” Moore, an original member of legendary Motown group the Miracles — who were responsible for such ’60s classics as “The Tracks of My Tears” and “Shop Around” — died Sunday (Nov. 19). He was 78.

Motown founder Berry Gordy confirmed Moore’s death in a statement. No cause of death was provided.

“I am deeply saddened to hear of the passing of Warren ‘Pete’ Moore, a fine human being and valued member of the Motown family,” Gordy said. “Pete was an original member of my very first group, the Miracles. He was a quiet spirit with a wonderful Bass voice behind Smokey Robinson’s soft, distinctive lead vocals and was co-writer on several of the Miracles hits.”

A childhood friend of Robinson’s while growing up in Detroit, Moore, and Robinson formed a singing group while they were both in high school. With Moore as the bass singer, the group was known as the Five Chimes and the Matadors before signing with Gordy’s Motown offshoot Tamla in 1959. They changed their name to the Miracles soon after.

Moore served as co-writer on many of the Miracles’ singles, including their classic “The Tracks of My Tears” (Number 50 on Rolling Stone’s 500 Greatest Songs List), “Ooo Baby Baby” (Number 266), “My Girl Has Gone” and “Love Machine,” as well as hits by Motown artists like Marvin Gaye (“Ain’t That Peculiar,” “I’ll Be Doggone”) and the Temptations’ (“Since I Lost My Baby”) Moore also produced the Miracles’ “Here I Go Again” and “Baby Baby Don’t Cry.”

After Robinson left the Miracles in 1971, Moore remained with the group until their dissolution in 1978. In 2012, Moore was inducted into the Rock and Roll Hall of Fame alongside the Miracles.

“A gentleman, loving husband, devoted father and loyal friend, we all loved him and will miss him,” Gordy added.

Previous article: 10 Filling Facts About A Charlie Brown Thanksgiving
Next Post: Which Charlie’s Angel Are You?