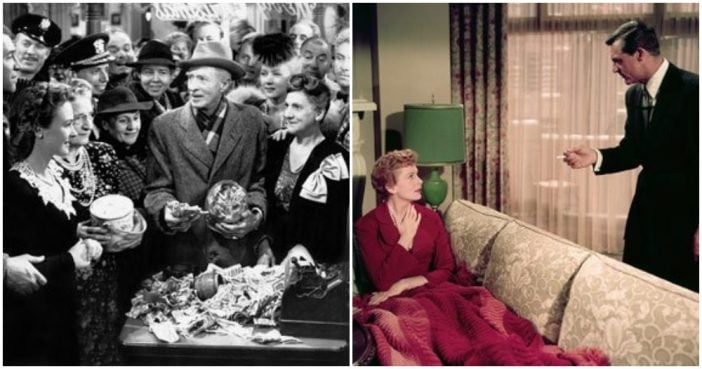 For good reason, a true tearjerker movie sticks with us forever. When a film touches are hearts and gets us to truly care about a story or a group of characters, we can be completely immersed in the action.

The results? A grown man crying like a baby during Titanic. I will not feel embarrassment for this, as these works of art were crafted in the hopes of carrying an audience through the ups and downs, and then a little lower even! Enjoy 25 of the greatest tearjerker movies of all-time!

We know that the beloved Brit teacher Mr. Chips (Robert Donat) is a kind man by the way he comforts the boy on the train who, like him, is nervous about going off to boarding school for the first time. And because we know that Chips was a lonely man who always spent summer holidays by himself, we cheer when he finally finds love with Greer Garson’s incandescent Katherine. And then comes the awful…

KLEENEX MOMENT when she dies in childbirth and Chips wanders off to the classroom. There he sits, dazed, while a choked-up student stumbles through the Latin lesson. That this scene is played with stiff-upper-lip restraint makes it all the more heartrending.

Based on Daniel Keyes’ novel Flowers for Algernon, Charly tells the simple story of Charlie Gordon (Cliff Robertson), a learning-disabled man who can’t even spell his own name. A radical new surgery turns him into a genius and enables him to win the heart of his lovely teacher, Alice (Claire Bloom). But their idyll is cut short when they discover the effects of the operation are only temporary — and that Charlie will return to his former state. Academy members couldn’t keep dry eyes either: Robertson won the Best Actor Oscar.

KLEENEX MOMENT Alice begs Charlie to marry her, or to let her stay as long as he can bear it. Turns out, he can’t bear it for one minute and, truthfully, neither can we?

The stories of four Chinese women and their difficult relationships with their daughters have explored in director Wayne Wang’s relentlessly emotional adaptation of Amy Tan’s novel. A chick flick through and through, the movie switches between the mothers’ early lives in restrictive Chinese society — dealing with child marriage, domestic abuse, and infanticide — and the Asian-American daughters’ present-day lives as they face loveless marriages, racist in-laws, and a major lack of connection with their moms.

KLEENEX MOMENT The trophy of tears goes to the deceased Suyuan (Kieu Chinh), as a flashback shows how she had to abandon her twin baby girls by the road while fleeing the invasion of Kweilin.

In 1981, an article in The New York Times identified the ”gay cancer” that would ultimately ravage the homosexual population. That item’s appearance opens Companion (the title refers to the newspaper-obituary euphemism for gay partners), a film that deftly injects the disease-of-the-week formula with a political agenda, providing its audience with the human face of AIDS. In a series of vignettes that take place over a decade, those faces, an appealing group of loosely connected Manhattanites of varying ages and socioeconomic and romantic status (some of whom get sick, some who don’t), eloquently represent an era filled with fear and loss.

KLEENEX MOMENT ”Let go,” Davison repeats, reassuring his lover as he gives in, turning the lonely process of dying into a beautiful collaboration.

Dying and death have been done (see half our list). But Sally Field took grieving to a new level in Herbert Ross’ Southern drama about a group of tenacious gal pals who gossip and grapple with love, loss, and beauty-shop appointments. She plays a feisty mother struggling to protect her diabetic daughter (Julia Roberts) as she starts a family, suffers kidney failure, and slips into a coma. Rumor has it there are male characters in the film, but it’s the women who carry all the weight.

KLEENEX MOMENT Surrounded by friends at her daughter’s grave, Field rages from hysterical anger to glacial calm. The tears don’t stop until the audacious moment when Olympia Dukakis offers Shirley MacLaine to her as a punching bag. See this clip below.

There are many movies about parental love, but few can match this one’s fierce sentiment. Gauche Stella Dallas (Barbara Stanwyck) is an embarrassment to the stiff, well-bred husband she snagged. Her one triumph in life is their nicely turned-out daughter, Laurel (Anne Shirley), who reciprocates her mother’s love. The two actresses are so good and their bond so touching that Stella’s sacrifice — pushing Laurel away to live with her father and his upper-crust new bride so that she’ll have opportunities Stella can’t provide — is absolutely devastating.

KLEENEX MOMENT Stella, outside in the rain, watching Laurel’s marriage with an expression of utter adoration. Her triumphant walk away afterward hits you even harder.

Timothy Hutton won an Oscar for his film debut as a suicidal high schooler haunted by his older brother’s accidental drowning. But the movie’s true gut punch comes from the counterintuitive casting of sunshiny Mary Tyler Moore as the appearance-obsessed, feeling-phobic matriarch who can’t tolerate the disintegration of her family after her favorite son’s death: Here, she can turn the world off with denial.

KLEENEX MOMENT Hutton’s agonized therapy session with Judd Hirsch over his guilt for surviving the sailing accident (Hirsch: ”What was the one thing wrong you did?” Hutton: ”I hung on”).

Erich Segal’s melodrama reveals the story of two lovers — a rich Harvard jock (Ryan O’Neal) and a middle-class Radcliffe music geek (Ali MacGraw) — whose lives are sewn together against all odds, and then ripped apart by cancer, all by the ripe old age of 24. But the true soul of the movie — and the tagline — is revealed near the end when a lovelorn O’Neal, whose soul mate has just died in his arms, says to his apologetic, overbearing father, ”Love means never having to say you’re sorry.” In 1970, this killed. And if you give in to the kitsch, it still works.

KLEENEX MOMENT After realizing she has the terminal disease, the raven-haired beauty says to her husband, ”I just want you…and I want time, which you can’t give me.” Enjoy below and try not to cry this time.

The story of the Civil War’s first African-American regiment, the 54th Massachusetts volunteers, is more than a moving history lesson. It’s a reminder that some things are worth dying for. Led by a Boston abolitionist (Matthew Broderick), the troops are made up of free men and escaped slaves — individuals for whom the word liberty is no abstraction — who train and fight bravely only to become cannon fodder in an effort to prove their worth.

KLEENEX MOMENT As soon as we hear the Boys Choir of Harlem startup over a military tattoo, the floodgates open, but when a white soldier starts a cry of ”Give ’em hell, 54!” as the regiment marches toward the inevitable bloodbath, we move on to sobs.

It’s easy to dismiss James Cameron’s Oscar-hogging tragedy as a one-trick pony, the sort of bombastic love story that made a gazillion dollars precisely because it hewed so closely to the Gone With the Wind formula. But because it did just that, the timeless love story at its core (good-but-rebellious rich girl meets scruffy-but-lovable poor boy) plays out so uncynically that it’s hard not to blubber when, following the ship’s awesome collapse and nearly three hours of adventure, betrayal, and window-fogging passion, we finally reach the…

KLEENEX MOMENT Slowly freezing to death, Jack (Leonardo DiCaprio) professes his love to Rose (Kate Winslet). She lets go of his hand, and he slips into the dark, unyielding sea.

The uniqueness of writer-director-star Roberto Benigni’s Italian Oscar winner lies in the theory that by using comedy to enhance the highs, the low points emerge as that much more devastating. (Jury’s out on whether turning genocide into a fable is the creative genius or cheap manipulation.) Benigni plays a father who shields his son from the horrors of a concentration camp by pretending it’s all a very elaborate game.

KLEENEX MOMENT Benigni convinces his boy to hide in a metal cabinet until no one is in sight, then, as he is marched past the cabinet at gunpoint, he plays soldier to avoid alarming his son. Nothing prepares us for the gunshots that follow.

It defined ”yuppie angst” before the term was even invented. After wife Joanna (Meryl Streep) abandons her family to ”find herself” (give her a break — it was 1979), Manhattan ad man Ted Kramer (Dustin Hoffman) raises their young son (Justin Henry). The emotional struggle that occurs when Joanna decides she wants her boy backpacks a more potent punch since the subtle performances avoid the obvious hero/villain stereotypes.

KLEENEX MOMENT At the custody hearing, Ted pleads with his ex-wife not to take their son: ”We built a life together…. If you destroy that, it may be irreparable. Joanna, don’t do that, please.” Sniff.

Continue on the final page to see Brief Encounter, The Notebook, and More!

Page Page 1 of 2
Previous article: Can You Solve This Question On A Third-Grader’s Math Homework
Next Post: 15 Hidden Airplane Features You Never Knew Existed