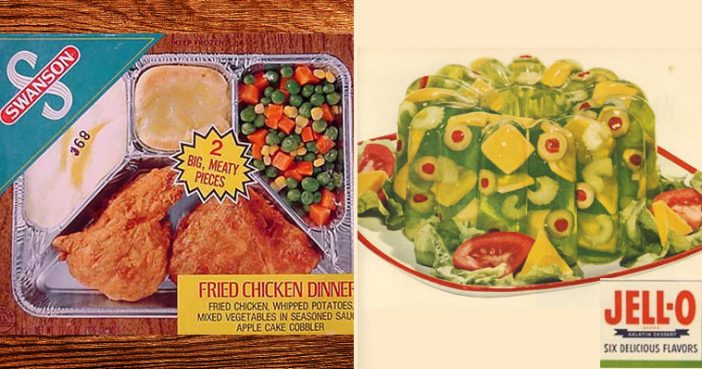 Nothing brings back childhood memories quite like a snack or meal you ate when you were a kid. Each decade is defined by recipes and trendy foods of the time. We’ve gathered decade defining eats from the 1950s through the 1990s. Be transported to your younger years with these nostalgic foods.

My grandma makes meatballs with grape jelly every year for Christmas. And every year, I eat them. They taste better than they sound. The grape jelly in the sauce gives the meatballs a sweet flavor.

Onion dips were extremely popular in the sixties. Although Lipton had the dip market cornered. Any recipe calling for Lipton onion soup mix in the dip was even more popular than the average onion dip. To this day, onion dip with potato chips is a classic pairing.

Swanson had literally, tons, of leftover turkey after Thanksgiving and challenged their employees to come up with a solution. One employee suggested frozen turkey dinners. In 1954, Swanson heavily advertised their frozen dinners. That year “Swanson sold more than 25 million TV dinners to hungry Americans, at 98 cents per package,” according to How Stuff Works.

A casual dining favorite in the 1950s is the tuna noodle casserole. No one can say exactly why it was so popular but I’d say because the ingredients were inexpensive and it can be cooked in a relatively short period of time. Bringing one dish to a party was easier than baking a cake and transporting it to a party.

Baked Alaska is an ice cream cake with a meringue shell. According to NPR, “it was once an incredibly opulent dish, requiring a full kitchen staff and a significant amount of time.” In the 1950s, baked Alaska was a dinner party staple. The Houston Press noted the pastel colors of the dessert matched the popular colors of the decade.

Page Page 1 of 3
Previous article: Eating “Tom The Thanksgiving Turkey” Can Be Super Beneficial For Your Health!
Next Post: Who Was Brad Pitt’s Roommate?