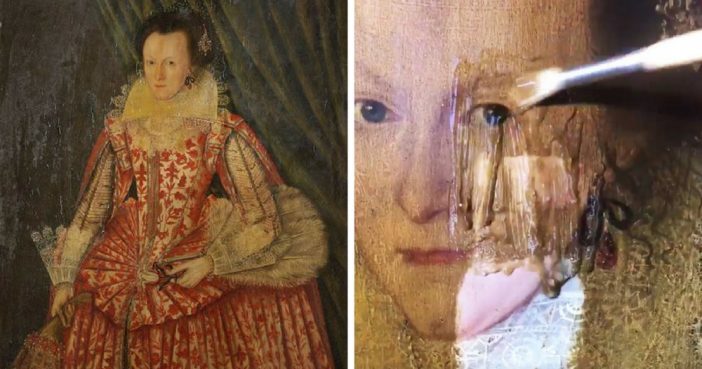 While some old paintings may have a yellow or brownish hue to them, underneath the protective varnish may be a perfect painting, filled with lush colors and depth.

Art dealer and TV personality Philip Mould shared a series of videos to Twitter on Monday, which show the removal of varnish from an oil painting from the Jacobean (1603-1625) era.

2/2 ….still a way to go, but what a transformation! pic.twitter.com/nyGx3qdhOZ

“A remarkable Jacobean re-emergence after 200 years of yellowing varnish,” he wrote.

A last smear from the chin removed. I will post an image of the completed picture as soon as it is ready. pic.twitter.com/K7TSl2XdqE

In response to those wanting sight of the uncleaned image of the #womaninred. All we know is she is 36 and it was painted 1618 (inscription) pic.twitter.com/3k8GYxvyJK

In the clip, a person can be seen with a small paint brush, wiping away the 200-year-old varnish from the oil painting. As the yellow varnish is removed, a lush and more colorful painting is revealed beneath it.

Small area of her astonishingly elaborate dress revealed. We dont know identity yet but certain iconographic clues are staring to emerge…. pic.twitter.com/2p1VqN79na