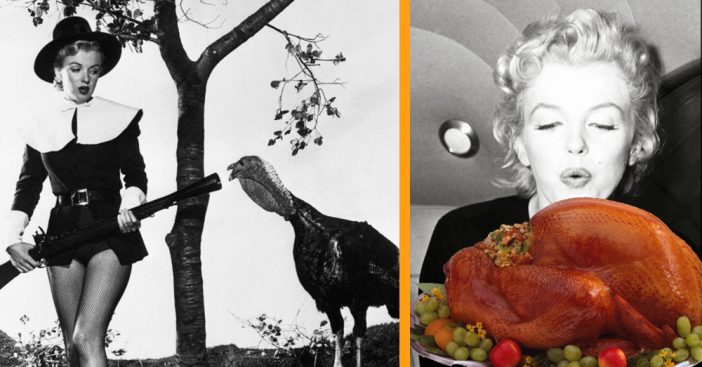 For those on the hunt for last-minute Thanksgiving recipe ideas, Marilyn Monroe’s handwritten checklist might offer some inspiration.

Jotted on a letterhead from an insurance company, the late screen siren explains how she prepares a turkey dinner, with all of the trimmings.

For the stuffing, she soaks a french loaf in cold water and adds five herbs, spices, and nuts, while to prep the bird she rubs it with salt, pepper, and butter, before cooking it in an oven set to 350 degrees.

On the hunt for a recipe? Marilyn Monroe’s handwritten checklist might offer some last-minute inspiration.

The notes, which feature in Fragments, a collection of her letters and musings from 1943 to her death in 1962, are the best evidence yet that she had a passion for cooking.

Fussing over details, Monroe writes that giblets must be ‘liver-heart’ and stipulates that the beef must be ‘browned (no oil)’. She even takes care to specify the quantity of the produce needed.

The most important instruction of all is right at the very top, where she states that ‘no garlic’ should be added to the stuffing.

Unlike other cooks, she uses little fat or broth and no eggs or binder to hold it together. To make the mix right it also needs ‘1 handful’ of grated Parmesan and an unspecified amount of ‘parsley’.

For the bird – either a chicken or turkey – she salts, peppers and butters it before stuffing and sewing it up and cooking at 350 degrees, for two hours or longer, depending on its weight.

The final meal is presented with sides of potato, canned button mushrooms, and fresh green peas.

The dab hand in the kitchen: Written on a letterhead from an insurance company, the detailed instructions explain how Marilyn prepped a turkey dinner.

Monroe’s flair for cooking was evident at an auction of her personal effects in 1999 when two well-worn cookbooks of hers from the 1950s were sold off for well above the reserve.