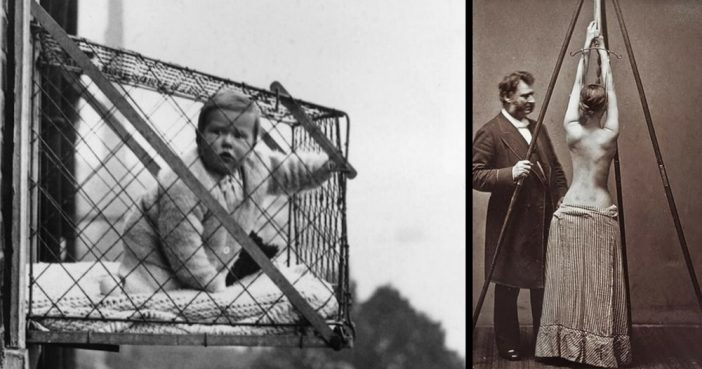 If you think people nowadays do unusual things, you should check out our comparatively recent history. You’ll see that our ancestors used to do even weirder things. But their actions were actually legal.

1. Sending kids through the mail

Nope, we’re not even joking about this one! At the beginning of the 20th century in America, parents could send their kids through the mail, and it wasn’t against the law. It cost around 15 cents if the child weighed no more than a standard parcel. So… um, ‘caring’ parents could send their kids to relatives without having to pay train fare. Maybe they should bring it back, I wouldn’t mind riding like a package!

In the 1930s, wire cages like were very common in built-up areas where floor space in the home was at a premium. With the help of these dangerous looking contraptions, kids could breathe fresh air while their mothers were busy with household duties. It’s unbelievable, but these cages were considered safe, and were even championed by First Lady Eleanor Roosevelt!

When you’re rich, you can buy whatever you want, right? Even people… and no, not staff to be your cook or butler. In the 18th century, it was apparently popular to have a personal hermit who lived in your garden, who wasn’t allowed to wash or cut their nails or hair and lived in a handmade shack. The poor people were meant to be shown off to wealthy guests as a way of impressing them!

100 years ago, people didn’t think cocaine was all that harmful. Quite the opposite in fact, as it was available in drugstores and sold without a prescription, as a remedy to heal coughs and toothache. It was even recommended as a sedative for kids with teething problems, and it was widely advertised through newspapers and posters at the time.

These days, we all know that smoking is bad for your health. It seems really obvious that it’s bad for you, and we know how and why. But it wasn’t always like that, and the so-called health ‘benefits’ of smoking were always outlined in the past. Just 70 years ago, for example, American doctors recommended their pregnant patients to smoke to get rid of constipation! Imagine how harmful smoking is to an unborn baby!

Previous article: These 18 Pictures Of Jeans Through The Ages Will Leave You Nostalgic…
Next Post: Super Tried Old-Fashioned Cold Remedies That Really Work