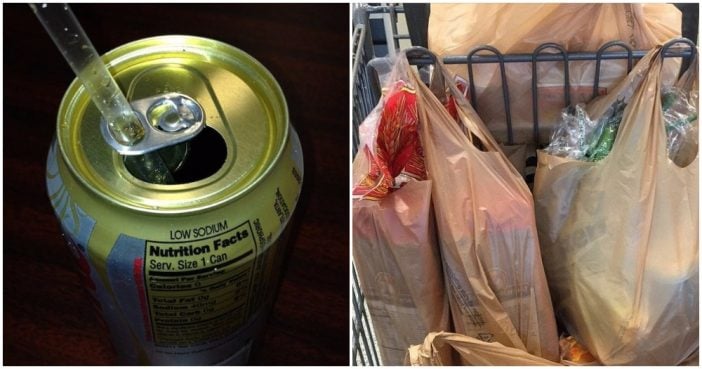 We do a lot of things every day and we learn a lot of new things every day. It’s now time for kind of a combination of both: here are some things you do on a daily basis wrong and how to do them correctly.

1. Quickly cooling a beverage in the freezer: Instead of just throwing a bottle of soda in the freezer to cool down, try soaking a paper towel with water and wrapping it around the bottle. Just watch as it gets icy cold in mere minutes!

2. Connecting cords in your home: You may have noticed that the last time you plugged something into an extension cord, it ripped right out. Try tying a small knot with the cords next time. That way, they’ll never disconnect again.

3. Wearing your earphones: You’ve probably seen at least one person who wraps their earbuds above their ear and down into the ear itself. That’s because it helps hold them in place so they won’t slip around when you’re listening to your favorite music!

4. Drinking soda from a can: At some point or other, everyone has had the annoyance of trying to get a straw to sit still in a can of soda. Those pesky bubbles just make it float out of the can! Thankfully, each can has a built-in straw holder. Simply turn the tab and slide the straw through!

6. Waiting in line: No one likes standing in long lines at the DMV, a restaurant, or at an amusement park. It turns out that the “Caribbean style” of waiting in line is a lot easier. Simply put your shoes where you would stand and grab a seat while you wait.

7. Eating Oreos: Most of us prefer to eat milk’s favorite cookie by—you guessed it!—dunking the Oreo into a glass of fresh milk. Unfortunately, many glasses aren’t built to accommodate our hands, and our fingers get wet. To fix that, try sticking a fork into the white cream center and dipping it that way. Voila!

Page Page 1 of 4
Previous article: 10 Most Expensive Gowns And Dresses Ever Worn
Next Post: These 18 Pictures Of Jeans Through The Ages Will Leave You Nostalgic…