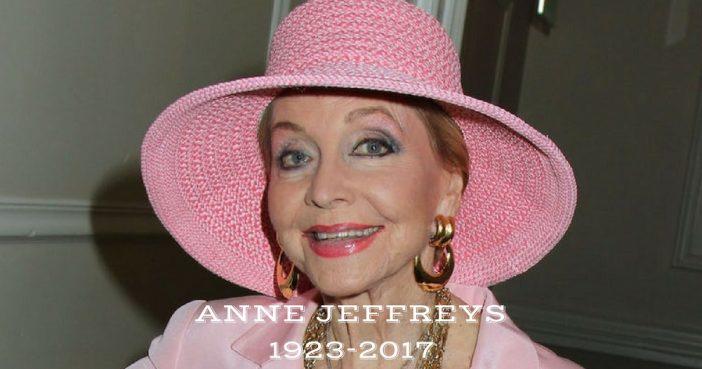 Anne Jeffreys, an actress whose career spanned the Nelson Eddy and Janette MacDonald era through a decades-long run into the 2000s as General Hospital‘s snobbiest socialite, has died. She was 94.

In addition to General Hospital, Jeffreys is probably best known to TV audiences for her co-starring role, with husband Robert Sterling, in Topper, CBS’ 1953-55 ghostly romantic comedy. She appeared in numerous Republic Studios and R.K.O pictures in the 1940s, including Flying Tigers with John Wayne, Step Lively with Frank Sinatra. She played Tess Trueheart in 1945’s Dick Tracy.

The actress also had a prolific stage and musical career, singing Tosca at the Brooklyn Opera House, My Romance on Broadway, and Kiss Me Kate in Los Angeles and New York, all in the ’40s. It was during her New York run of Kate that she met and married fellow Broadway actor Sterling (Jeffreys’ first, brief marriage had been annulled). The couple were married until Sterling’s death in 2006. They had three sons.

“My life has been a full, happy and active one,” Jeffreys once said, as quoted on her official website, “and I hope I’ll always be as busy as a blind dog in a meat shop. I thrive on activity.”

Other TV credits included Bonanza, The Man from U.N.C.L.E., Falcon Crest, L.A. Law, Baywatch, Battlestar Galactica, Port Charles and, in her final appearance, HBO’s Getting On. She first played her General Hospital character, the rich and snooty Amanda Barrington, in 1984, and continued in prominent storylines through the 1990s. Her final appearance on the show was in 2004, and in 2013 the character’s off-screen death was revealed.

She was clearly very loved as her tributes are truly beautiful….