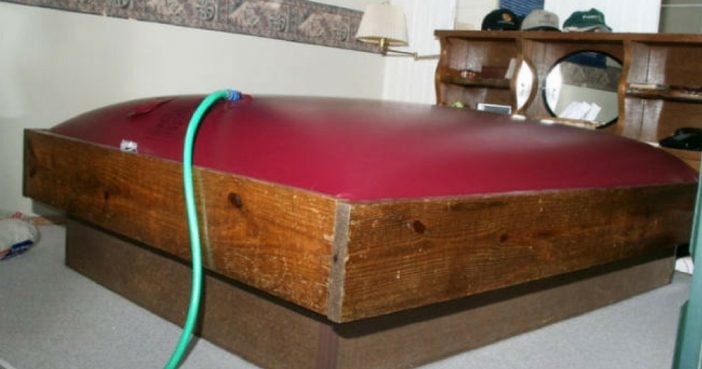 For kids and adults alike, waterbeds used to be the coolest—until suddenly they weren’t. After a heyday in the late 1980s in which nearly one out of every four mattresses sold was a waterbed mattress, the industry dried up in the 1990s, leaving behind a sense of unfilled promise and thousands upon thousands of unsold vinyl shells. Today, waterbeds make up only a very small fraction of overall bed and mattress sales. Many home furnishing retailers won’t sell them, and some that do say it’s been years since they last closed a deal.

So what happened? Although they were most popular in that decade of boomboxes and acid-washed jeans, waterbeds had been gaining steam since the late 1960s, and in retrospect seem to have more substance to them than other notorious fads. How did our enthusiasm for sleeping atop gallons and gallons of all-natural H2O drain away so quickly?

By some accounts, waterbeds date all the way back to 3600 BCE, when Persians filled goat-skin mattresses with water warmed by the sun. In the early 1800s, Dr. Neil Arnott, a Scottish physician, created a “hydrostatic bed” for hospital patients with bedsores. This was essentially a warm bath covered with a thin layer of rubber and then sealed up with varnish. In 1853, Dr. William Hooper of Portsmouth, England patented a therapeutic rubber mattress that could be filled with water. It, too, was for hospital patients suffering from poor circulation and bedsores. In the mid 20th century, science fiction writer Robert Heinlein—inspired by the months he spent bedridden with tuberculosis in the 1930s—described waterbeds in great detail in three of his novels. The beds he envisioned had a sturdy frame, were temperature-controlled, and contained pumps that allowed patients to control the water level inside the mattress. There were also compartments for drinks and snacks, which sounds really convenient. It was, according to Heinlein, “an attempt to design the perfect hospital bed by one who had spent too damn much time in hospital beds.”

The inventor of the modern day waterbed was an industrial design student named Charles Hall, who in 1968 submitted a waterbed prototype (made with a vinyl mattress rather than a rubber one) for his masters thesis project. Hall wanted to rethink furniture design, and was taken with the idea of fluid-filled interiors. Before settling on the waterbed, he had tried filling a chair with 300 pounds of cornstarch gel, which quickly rotted. He also tried using JELL-O as a filling, with similarly disastrous results. The introduction of water fulfilled his vision without the ick factor. During the graduating class’s thesis workshop, Hall told The Atlantic, students ignored other projects and ended up hanging out on his waterbed.

Hall established his own company, Innerspace Environments, and began manufacturing waterbeds for sale throughout California. Early customers included the band Jefferson Airplane, as well as the Smothers Brothers. Eventually Hall’s bed, which he named “The Pleasure Pit,” made its way into 32 retail locations throughout the state. Success was short-lived, however, as cheap imitators quickly flooded the market. By the early 1970s, dozens of different companies were manufacturing waterbeds, feeding the growing demand for a groovy new way to … sleep.