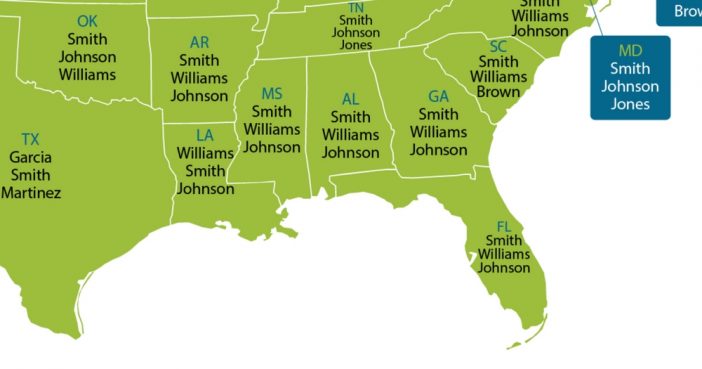 When doing your family research, do you stumble across the last name Smith in your area frequently? According to listings in the white pages, Smith is one of the most popular last names in almost every region of the United States.

Smith, along with Johnson, Miller, Jones, Williams, and Anderson make up most of the most popular surnames all across the country.

But there are still regional differences. If you are in the Northwest, you are more likely to come across an Anderson than a Brown, which is slightly more common on the East Coast.

Only the Southwestern portion of the country really has a lot of variety. States like Texas, California, New Mexico, and Arizona — where there are large Latino populations — boast a variety of names like Garcia, Hernandez, Martinez, and Chavez.

And then there’s Hawaii, whose three most-popular surnames — Lee, Wong, and Kim — don’t even appear in the top three anywhere else in the country.

And Massachusetts, with its large Irish population, is the only state that has Sullivan in its top three.

If you are looking to explore more about your own last name, you can search for its meaning and origins at ancestry.com/surnames.