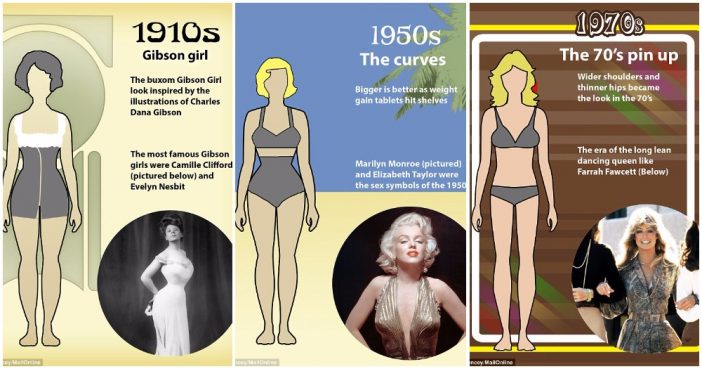 Women have always been under pressure to look and appear a certain way, but only recently have humans been able to compare and comprehend the many expectations placed on females over the years. Within short frames of time, as Vintage Everyday reports, there may be drastic differences between what the mainstream collective deems to be the “perfect body shape” for women. Sometimes, curves are celebrated whereas in some decades, waif-like, stick-thin figures are popular.

Fortunately, technology has connected individuals around the globe and, as a result, helped to diversify the types of models that are featured in print and online advertisements. The message that “diversity is beautiful” is growing in popularity and is resulting in various body forms being celebrated.

However, there’s still a lot of work to be done. Popular culture glorifies diet pills, eating disorders, and abusive habits which are likely to damage members of the population on mental, physical, and emotional levels. By acknowledging that humans exist in all sizes, shapes, and forms, perhaps fewer individuals will feel burdened by their physical appearances and begin applying themselves to efforts which may benefit others on a large scale. For now, gain perspective on the varyingly ridiculous expectations placed on women over the years.

By 1920, the flapper girl was well in fashion and a trim figure was all the rage

With their men off fighting, fashion changed in the Forties and the curvy feminine look to cheer returning heroes became the order of the day.

Page Page 1 of 4
Previous article: What’s The Length Of The Chain?
Next Post: 13 Incredible Facts That Will Change The Way You See The World