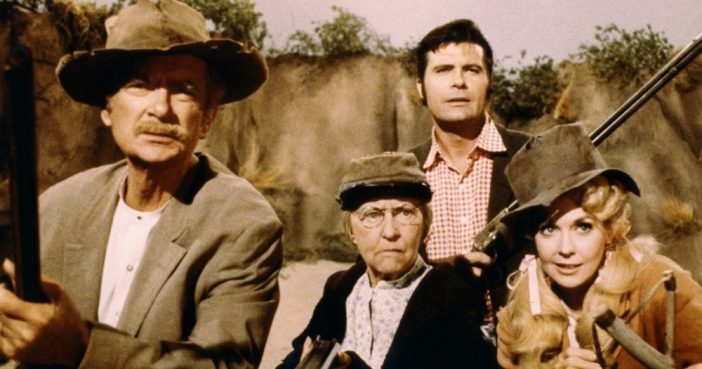 Though it wasn’t always well-received by critics, The Beverly Hillbillies stands as not only one of the most popular shows of the 1960s but one of the most popular in all of television. Through nine seasons on the air, Americans loved the poor, simple antics of a family who moves to an upper-class neighborhood in Beverly Hills after making a fortune following the discovery of oil on their land. Fans still watch reruns shown in syndication to this day and it’s ranked among the top 20 most watched TV shows of all time.

Want to learn a few more things about The Beverly Hillbillies? These 20 amazing facts you’ve never heard before.

1. A Lot Of Hatred and Criticism

The show was among the top 20 most-watched programs on television, with a number of episodes labeled as the most-watched television episodes of all time. It even collected a total of seven Emmy nominations during its run. Despite that success, the show was not exempted from criticism and hatred.

The New York Times wrote that the show was “strained and unfunny,” while Variety said it was “painful to sit through.” The worst criticism read – “If television is America’s vast wasteland, the ‘Hillbillies’ must be Death Valley.”

Nancy Kulp, who played the character of  Miss Jane Hathaway, secretary of Mr. Drysdale, tried and ran for office as the Pennsylvania Democratic nominee for the U.S. House of Representatives when she was 62 years old. That was after her acting career.

Her Beverly Hillbillies‘ co-star Buddy Ebsen, who during the show did not get along with her, volunteered to make a radio campaign in support for Kulp’s opponent and called her “too liberal” on the air. Kulp lost the election and was bitter to him because of what he had done.

Rumor was spread that the creator of the show, Paul Henning, paid $500 to film in a Bel Air mansion that the Beverly Hillbillies lived in after striking oil. That price is a top bargain compared to what he’d have to pay today.

The show’s theme song was titled “The Ballad of Jed Clampett.” It was originally sung by the country western singer Jerry Scoggins, featuring the bluegrass duo Flatt and Scruggs. The song became the show’s trademark and was also recognized for its popularity, landing up at #44 on the Billboard Hot 100 chart in 1962.

5. John Wayne to fight the “Injuns”

On the show’s fifth season, John Wayne had a small guest appearance. On the episode titled “The Indians Are Coming,” Granny kept mentioning her hopes country star John Wayne would show up and help fight the “Injuns,” – yes, that’s Indians with an accent! Coincidentally, at the end of the episode, John Wayne actually does show up, and Granny’s dream is fulfilled. Reportedly, Wayne was happy to accept a fifth of bourbon as payment for his appearance on the show.

6. Have you seen Sharon Tate?

Sharon Tate may have been most famous, being one of the victims of the Manson family killings, as well as being the pregnant wife of director Roman Polanski at the time, but she also played a recurring role on the American Hillbillies. She appeared approximately 15 times on the show in the recurring role of bank teller Janet Trego. Many fans did not recognize her at first because she’s in disguise wearing a brunette wig.

Max Baer Jr., who played the role of Jethro Bodine is the only remaining actor from the main cast alive. He had dreams and ambitions to create a series of Beverly Hillbillies themed hotels, restaurants, and casinos in Nevada.

Donna Douglas who played the character of Elly May could not really be defined as the princess type. However, this did not stop Mattel toy company from featuring her character as one of three Barbie dolls in its Classic TV Collection.

In 2011, Douglas decided to sue Mattel for using her likeness without her consent on the doll. In the end, the actress ended up settling the suit.

9. How to cook Granny’s Fried Possum

Granny, who was portrayed by Irene Ryan, is known in the show to cook fried possum. It is true that fried possum may not sound particularly appetizing, but a lot of cooking books and recipes were inspired by Granny’s cooking, including Granny’s Beverly Hillbillies Cookbook, rated for its recipes, photographs, and character profiles.

Barnaby Jones was a TV detective series portrayed by Buddy Ebsen. The series was on CBS from 1973 to 1980 and it was as this character that Ebsen appeared in the 1993 movie adaptation of his famous television show – The Beverly Hillbillies. Below you can see a great clip of Ebsen’s, explaining women to Max Baer Jr!