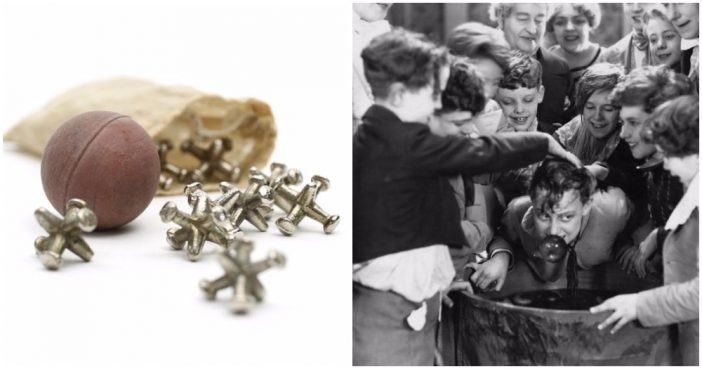 Today, let’s rewind the clock to some of our favorite playground games from simpler days! In a 1962 Twilight Zone episode, a man finds the secret to the fountain of youth. The secret lives in playing a simple game called kick the can. The man lives at Sunnyvale Rest Home. He eagerly shares his find with other residents of the nursing home. Everyone is optimistic about the man’s discovery, except one man.
The residents decide to try out the game to see if it’ll work. The man who doesn’t believe it lets the other residents make a fool of themselves playing the game. Then, one by one, the other senior citizens turn into children, and it’s too late for the lone dissenter. Games can’t really turn you into a kid again, but they can keep your mind young. Here are seven classic playground games that are not only fun but can also help you remember your childhood.

Got chalk? You can get a game of hopscotch going.
Draw rectangles into a pattern and toss an item into one of the rectangles. Hop through the other spaces to retrieve the item.

Jumping rope is not only fun, it’s a great workout.
You just need a jump rope or long cord to get going.

If you’ve ever been to a Halloween party, bobbing for apples probably has been an event on the agenda.

If you haven’t had the opportunity to bob for apples, why not try it out? It’s pretty easy to play. Just fill a tub up with water and add apples. Use your teeth to try to get the apples out of the water.

Tug of war was a gym class staple.

All you needed to play was a knotted rope, two teams, and muscle.

Marbles have been around since ancient times. According to Wikipedia, archaeologists have found marbles made of clay, stone, and glass. Modern marbles are usually made of glass. To play marbles, you line up the marbles in various configurations and use a bigger marble to shoot.

Jacks is a delightfully simple game. It is another game that has actually been around for a long time. The game is also known as knucklebones because people used to use animal knucklebones instead of the metal knobs to which most modern people are familiar with.
Jacks is a pretty simple game. You throw a jack up into the air and try to pick up other jacks while the thrown jack is still in the air.

Remember dodgeball? It’s another game that was a staple of gym class. The gym teacher would separate the class into two or more teams.

11 Horribly Offensive Board Games Of The Past

Popular Outdoor Games You Played In The 70s

Click for next Article
Previous article: DuckTales Returns To Our Screens After 30 Years With A New Series!
Next Post: Can You Find the Letters “DYR” 5 Times in this Patrick Swayze illustration from Dirty Dancing?